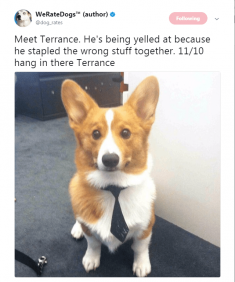 Today in pawsitively awesome news, the beloved Twitter account WeRateDogs has rewarded us all with a delicious treat, the new book #WeRateDogs: The Most Hilarious and Adorable Pups You’ve Ever Seen.

The account, run by twenty-year-old Matt Nelson, has grown over the last two years, fetching 3.7 million followers. There’s also an e-commerce shop, phone app, and now the book, as Jennifer Gardner reported last week over at the Charleston Gazette-Mail.

The book, whose author should have been listed as Virginia Woof, is filled with photogenic doggos and puppers captured by the puparazzi doing absolutely wonderful things like looking hckin cute, being good boys and girls, wearing clothes, and simply existing.

Nelson’s book follows the format that has made his tweets so virally beloved: introduce a dog with a photo, explain what they’re doing in a brief caption, and score them on a scale of 1-10. But keep that Westminster wet-nose-in-the-air snobbery to yourself — all these dogs get high marks, normally at least twelve or thirteen out of ten.

So maybe lately you’ve been having a ruff time of it in this crazy world. Sometimes, we all feel like we’ve been running around in circles, chasing our tails, as it were. The puggle is real. So maybe it’s time to take your dog-eared copy of your new favorite book, curl up on the end of the bed, and indulge in some pure, innocent doggos.