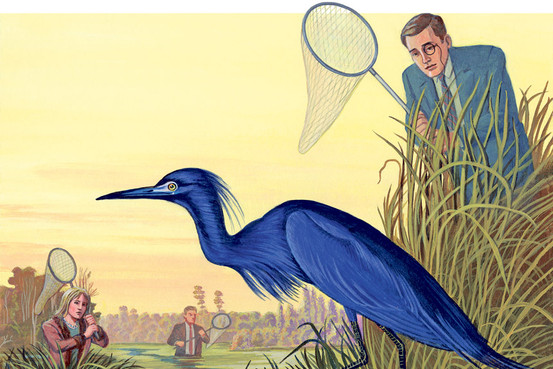 “It’s just really, really gotten to me…I just can’t sleep at night,” Graham Arader, New York rare-book dealer and a leading bidder for a copy of James Audubon‘s Birds of America, told Ellen Gamerman of the Wall Street Journal recently for a story about the behind-the-scenes jockeying in advance of the book’s auction to be held on December 7th at Sotheby’s in London.

The complete, bound set of Birds responsible for Arader’s insomnia is valued by Sotheby’s somewhere between $6.2 million and $9.3 million. And it is apparently as rare as some of the birds Audubon himself illustrated. Here is Gamerman’s explanation as to why this book is causing sleepless nights among those who can afford to care:

When Sotheby’s puts the book, Lot 50, up for sale on Dec. 7, auction executives will be holding their breath. An original copy of “Birds of America” like a Picasso, a Warhol or a Faberg egg has long been seen as a critical trophy for a serious art collector. After record-breaking sales of work by artists Amedeo Modigliani, Henri Matisse and other marquee names this fall, a blockbuster price for “Birds” would further signal that art-world trophy hunters are out in force again and bidding aggressively.

The book’s value is a function of its scarcity, its beauty and its significance to the field of natural history. The high-water mark for “Birds” came in 2000, when a bound set sold at Christie’s for a record $8.8 million to a buyer identified by rare-book experts as Sheikh Saoud Bin Mohammad Bin Ali Al-Thani of Qatar, after a bidding war.

There’s a fair amount of intrigue surrounding the folks rumored to be involved in the bidding. You’ve got a Walmart heiress, hedge-fund managers, Russian and Japanese billionaires, and the aforementioned New York dealer. And the logistical demands involved in carting this thing around the world for potential buyers to view are equally impressive, which require it to be “fastened with double locks, covered in blankets and bubble-wrap and secured inside a crate.”

If the book sells within the valued range it will be one of the highest sums fetched by a bound book at auction ever. Even so, it appears likely to go for more than that if the pre-auction chest-thumping is any indication. Arader’s enthusiasm has him publicly proclaiming to the Journal that he’s likely to go as high as $10 million, while seeming to challenge the testicular fortitude of some of the other bidders: “If you’re a manly man, you get your trophy wife, you get your Falcon 50, your home on the water in Greenwich…and you get your complete set.”