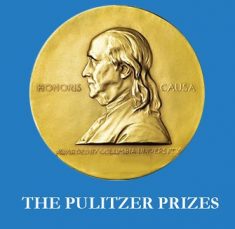 Announced on Monday, the Pulitzer Prizes brought an emotionally uplifting respite to an otherwise dreary day. For NPR, Colin Dwyer reports on some of the highlights.

The Pulitzer in literature went to Richard Powers for The Overstory, a massive novel that follows nine separate characters throughout their lives and their relationship with the environment around them, specifically trees. It was a New York Times bestseller when it came out in 2018, and a finalist for the Man Booker Prize. Last spring, Lit Hub’s Kevin Berger visited Powers at his Tennessee home to discuss the book. It’s a wonderful interview that gives insight not just into what’s influenced Powers’s writing, but also the dichotomy within literature of what constitutes realist fiction.

Before announcing the awards, Pulitzer Prize administrator (and former winner herself) Dana Canedy spoke of one group of nominees who might not have won, but deserve a moment of honor. The student journalists of The Eagle Eye at Marjory Stoneman Douglass High School in Parkland, FL, where 17 people were shot and killed during yet another school massacre, represented the very nature and importance of community journalism.

“I want to break with tradition and offer my sincere admiration for an entry that did not win, but that should give us all hope for the future of journalism in this great democracy. These budding journalists remind us of the media’s unwavering commitment to bearing witness even in the most wrenching of circumstances, in service to a nation whose very existence depends on a free and dedicated press. There is hope in their example even as security threats to journalists are greater than ever and there is hope even if some wrongly degrade the media as the enemy of the very democracy it serves.”

Dwyer writes, “The staff of the Eagle Eye didn’t win a Pulitzer. But it did set the tone for the crop of Pulitzer Prize winners to come, many of whom faced down threats — both verbal and physical — in an increasingly fraught environment for the media in the U.S. and abroad.”

The other winners in the trade publishing categories were:

The ceremony was held at Columbia University. NPR also lists all winners of the 2019 Pulitzer Prizes here.