Book recommendation engines have been buzzing around the publishing industry probably since Google first breathed fire into the loins of the internet. Now, if you’re the kind of person that checks a box saying you liked one Daniel Silva book, and don’t mind having 500 others recommended back to you again and again and again, then maybe you’ve found a book recommendation site that works for you. Unfortunately for the rest of us, there hasn’t yet been a book-recommending robot that understands how to judge human taste well enough to satisfy a diverse literary palate.

HarperCollins’s new messenger bot on Facebook is no different. If you log in to their (unimaginatively named) BookGenie, you can either explore recommendations by some of their bestselling authors or offer a title you’ve enjoyed reading to receive a suggestion. I decided to give it a spin with one of my favorite authors, Dr. Chuck Tingle.

I initially struggled with formatting demands of their sensitive robot: 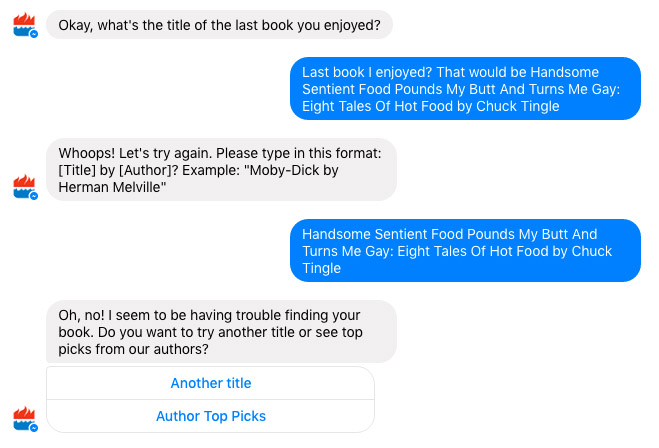 Hm. Does the robot not like to mix food with pleasure… reading? I moved on to another Tingle classic. This time it found it and recommended something that even in the deepest parts of the Tingle universe could not be considered as even in the ballpark of what I was hoping for: 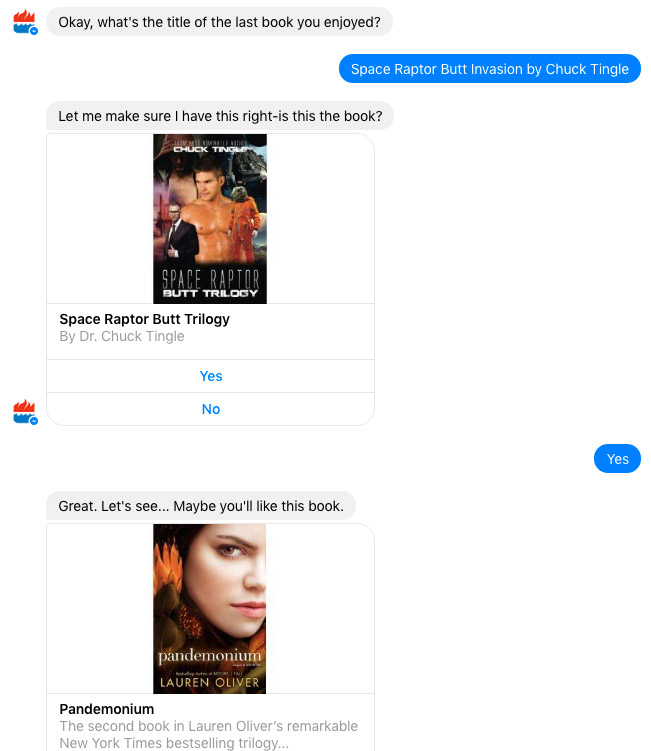 First things first: Pandemonium is a YA book. I don’t know what the crossover often is between dinosaur erotica and YA readers, but I’m guessing that it’s exclusively young men who caught the mist-system glisten of a velociraptor statue while waiting in line for the Jurassic Park ride at Universal and got too excited for amusement park attractions.

BookGenie, I’m not giving up on you yet. But clearly we’ve got a ways left to go.