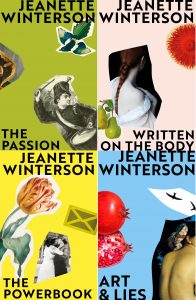 Author Jeanette Winterson had an impromptu little bonfire on Friday 4th June … burning her own books.

Why, you might ask, would an author do such a thing? Winterson herself is claiming “protest.” Others are shouting “PR stunt.”

The prize-winning writer, perhaps best-known for her 1985 classic Oranges Are Not the Only Fruit, is published by Vintage who have recently reissued five of her books with new covers: Sexing the Cherry, Written on the Body, Art & Lies, The Powerbook and The Passion. This design process was a large undertaking, with Vintage’s Creative Director Suzanne Dean telling Creative Review: “The designs feel fresh, modern and exciting and they play with the range of ideas and concepts within her books.”

Unfortunately, Winterson did not feel this design concept applied to the blurbs chosen to adorn the new editions. Blurbs, which she claimed on Twitter, made her books sound like “wimmins fiction of the worst kind.” And what do you do when you hate something? Why, set fire to it of course!

Gutted. All the people who worked on them. All the writers who would love their work to have a renewed spotlight. The dig at women's fiction. The fire makes me so sad -burning so much more than your contempt. I was such a fan of your work too.

These blurbs included: “a wonderful, unforgettable read. Buy it for someone you really love” from Simon Schama in the Mail on Sunday and “Winterson never seems to put a foot wrong … it is funny, clever, entertaining and wholly delightful” from the Spectator. Hardly groundbreaking sentiments, but genuine praise nonetheless that many authors and publishers would kill for.

Winterson explained her book-burning further by telling the Guardian:

“Each of those books was doing something different at the time, both with form and content.

“The Passion was both a way of reimagining the historical novel and it had a cross dressed narrator. Written on the Body had a non-binary narrator. The Powerbook was an early virtual and blended reality experience, that bent time as well as gender. The blurbs had none of this and turned the books into the tame and the obvious. A friend said, ‘God, you sound like Mills & Boon!’”

The response to the literary blaze has been dramatic. While some leapt to Winterson’s defence, arguing she has the right to do whatever she wants with her art and she was just in feeling the chosen blurbs trivialised her writing, the majority of the hundreds of comments on Twitter were more critical.

Same. The blurbs are awful. Everyone crying about the book burning is overlooking the fact that these are her own books, not some act of censorship, and it’s just a small stack for a book that will surely have a huge print run.

Many questioned why she did not raise issue with the covers before they went to print. But she may not have seen them—most publishers have full autonomy over book design choices as they are the marketing experts. Some questioned why the need to burn and shame when she could have resolved matters reasonably with her publisher. But by far the biggest criticism has come from Winterson’s contempt directed at “women’s fiction.”

According to Helen Taylor’s book Why Women Read Fiction, women make up 80 percent of fiction sales in the UK, US and Canada. And it is true you will often find more female writers in the genre of romance or history, often writing about the female experience. But does this make them lesser? Not all authors can be literary prize-winners. That surely doesn’t mean we should belittle books, often highly popular ones, because they are not to our “taste.” Catherine Robertson succinctly highlighted the hypocrisy for The Spinoff:

“Cosy. Little. Domestic. Words that have been used to demean and diminish women since the invention of the house. Winterson calls herself a feminist and writes about issues that affect women. But it seems she still considers some women less worthy than others.

“Of course she’s wrong—simple as. Women with PhDs read Mills and Boon. Surgeons and activists and company directors read women’s fiction. Many of them have also probably read at least one Jeanette Winterson.”

Does Winterson have the right to criticise the repackaging of her own books? Why, yes! But is setting fire to them and shouting loudly about it on Twitter, thereby disparaging the work by so many that went into making the books (even if mistakes were made), AND slagging off other female writers the best way to go about it? And let’s not pretend that the horrific history and therefore connotations of book burnings don’t add further sourness to the situation. As Marianne Levy writes for the Independent:

“With its echoes of Nazi book burnings and the dig at women’s fiction, this is scandal itself. It is also the most tremendous generator of free column inches, especially given that these are books (The Passion, Written on the Body, Art and Lies and The Powerbook) that were written more than two decades ago, between 1997 and 2000.”

Was this more than just a “protest” after all?