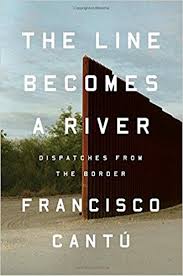 At twenty-three years old, partly energized and partly disillusioned by his degree in international relations, Francisco Cantú joined the US Border Patrol. In an interview with Ursula Kenny for the Guardian, Cantú explains the motives for his decision:

I grew up in south-west Arizona, where my mother was a park ranger. As a child I was very close to the landscape — always out in these wild places. I went on to study immigration and border policy in Washington DC, but when I was in college reading books and academic accounts of the border, I really felt like something was missing. By the time I graduated I knew that I wanted to go back to the border, to deepen my understanding of it and be out in it.

Earlier this month he published a memoir, recounting the four years he spent with the patrol: The Line Becomes a River. The book, published by Riverhead, received quite a bit of early excitement, with tons of major review coverage and a slot on the coveted Indie Next List.

Cantú is a strong writer, and his book questions the absurdity of the border while highlighting the lives it has torn apart. Perhaps the book’s greatest treat (intentional or otherwise) is the light it casts on how Border Patrol cops speak and act when they think no one is watching (though there is strong enough evidence that they act like this when the world is watching as well). The book is best when presenting these Liar’s Poker-style ethnographies of a reprehensible culture.

But when we consider confrontations between immigrants and the US Border Patrol, is the perspective of the latter the more interesting or important of the two? Does Cantú’s sensitivity toward and humanization of his detainees simply put lipstick on the ugly face of power?

Thankfully, protestors at one of Cantú’s California events are asking and answering those questions (no, and yes, respectively)

At a February 19 event in San Francisco, at Green Apple Books on the Park, roughly 12 activists disrupted Cantú’s reading. They entered the event, forming a circle at the front of the room and, for half an hour, peacefully took turns reading three-minute narratives about abuses committed by the Border Patrol.

“It was very peaceful and moving,” said Green Apple Books co-owner Kevin Ryan, who witnessed the protest. “I asked Francisco if he wanted to speak or address anything. And he said, ‘No. I don’t have anything to say. Everything they said was true.’”

This strikes me as brilliantly effective protest: the amplification of the stories that get silenced in power’s retelling of an event. And it seems to have been doubly effective: both author and bookseller recognized its significance.

That event, however, has lead to a cancellation on the author’s tour. As Boog notes: “After canceling his Feb. 20 event at Oakland, Calif.’s East Bay Booksellers, the store’s owner, Brad Johnson, sent a note to his patrons, calling the attacks being leveled at Cantú ‘indistinguishable from bullying.’”

The Green Apple scene did not repeat itself at Cantú’s San Diego tour stop, though one wishes it would have. If anyone deserves a little of that kind of bullying, it’s a border cop, and Cantú, to his credit, is willing to listen.