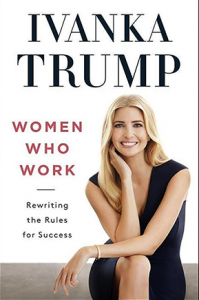 Last May, we reveled in the news that Ivanka Trump’s latest book, Women Who Work, was on the road to ruin, having only sold 10,445 print copies in its first week; a respectable mark by some measures, but certainly not by that of Trump’s publisher, Portfolio. As was noted, Portfolio needed to sell about 200,000 copies just to make back the estimated $850,000 advance.

At the time, we promised never to return to this dumb story again. Turns out we lied, because Women Who Work has found its way back into the publishing news circuit. Deniz Cam, writing at Forbes, has done a post-mortem on the book, seven months after its initial publication — and the results are grim.

According to BookScan numbers Cam pulled, Women Who Work has sold about 31,900 since its release last May. BookScan gathers about four-fifths of retail book sales, so we can reasonably estimate total sales for the period around 40,000. (Cam uses slightly different numbers — we’ll get to that.) From this, Cam estimates that the book gathered $1.1 million dollars in total revenue, of which Portfolio received $566,000. She doesn’t spell out exactly how she got here, but sure

So, I came up with different numbers. I don’t mean this is a challenge to Cam—her estimates are eminently reasonable—but the game is fun, and I want to play too. Cam figures BookScan catches eighty-five percent of total print sales. If we account for that missing fifteen percent, we’ve got a print sales total of aproximately 37,500 units, which (folllowing Cam’s $1.1 million revenue estimate) would mean that each book sold was generating $29.30 in revenue. Unless I’m missing something, that can’t be right — at Barnes and Noble, the current list price is $26.00, but the sale price is $18.01. Ditto at Amazon (though there are signed first editions going for as much as $89.99). According to my calculator, this suggests total print revenue may actually have been closer to $680,000, and that, using Cam’s assumptions about markup and margin, Portfolio’s take would have been closer to $350,000.

BookScan also doesn’t account for e-book sales. Assuming (admittedly, somewhat arbitrarily) that e-books represented twenty percent of total revenues, we’re looking at another $165,000 in sales, which (assuming a higher margin for digital sales, since the overhead is much lower) might mean another $100,000 for Portfolio, bringing us up to $450,000 for combined print and digital revenue. That’s my guess. (It’s possible that Cam’s higher numbers result in part from her assuming significantly larger e-book sales? Would be interesting to see the scratch paper.)

Now. Portfolio hasn’t publicized the exact advance that it paid for Women Who Work. Cam assumes $787,500, a number that appears to have been pulled from a 2017 article by Katie Van Syckle in The Cut. Van Syckle hedges a little on that number, suggesting that this might not represent the entirety of Trump’s advance. Last year, Alex Shephard speculated that the advance could have been closer to $850,000, based on statements that Trump had given regarding her charitable donations to Boys & Girls Clubs of America and the National Urban League.

Using the updated numbers ($450k in gross revenue for Portfolio, against an $850k advance) it’s possible that Portfolio is out nearly half a milli for this dumb-ass book. Possibly more, if we factor in the costs of promotion and production (how many copies have been pulped?); possibly less if Portfolio has been able to generate additional revenue through rights sales and similar consideration.

The upshot of all of this is the observation that Ivanka has mastered her father’s greatest skill: convincing people to take on absurd amounts of risk, while paying for the privilege. And really, is it any surprise that the daughter of our immensely unpopular, TV-worshipping president wouldn’t have a robust print readership? Are we shocked that, in the year of #MeToo and the Women’s March, Trump’s brand of gilded-age faux-feminism (complete with extreme misquotes) is losing some of its luster?

One last bit of trolling before we go: Just as the star is setting on Women Who Work, Michael Wolff’s Fire and Fury is, by all accounts, having a hell of a run, selling nearly 30,000 copies in its first weekend, and prompting Mother Jones to speculate that it may one day outsell The Art of the Deal.