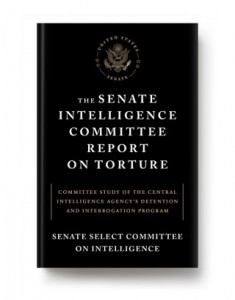 Melville House published the only section of the report that had been de-classified, although it was still heavily censored by the CIA — of which the report was highly critical.

Democratic Senator Dianne Feinstein, head of the Intelligence Committee when the report was released, has joined other officials in accusing Republicans of trying to “erase history” by blocking release of the full report, which details the CIA’s rendition and interrogation program during the war in Iraq under the administration of George W. Bush.

“The Torture Report is one of the most important public documents of our lifetime,” explained publisher Dennis Johnson. “We wanted to do what we could to help spread the word that it was in danger of disappearing forever under this Republican government. Also, we felt that reading even this small part of the report was revealing — it is the ten percent of the iceberg that bespeaks the missing ninety percent. It will make the hair on the back of your head stand up and leave you wondering: What on earth could be so much worse than this that they won’t release it?”

Melville House famously rushed the report into print when it was released as a blurry PDF on a Friday afternoon just before Christmas, getting print and digital editions out in an astonishing three weeks.

“One of our key goals was to make this a searchable digital book, which the government version really wasn’t,” said Johnson. “That took some grueling, round the clock work re-making the core document — including replicating the CIA’s innumerable black redactions — but lots of researchers and legal organizations such as the ACLU thanked us for that later, so we know this is a thing of meaning and import to circulate.”

The company has made the book available for free on its own website and at all retail outlets that sell digital books for the next week.

Get your free PDF, EPUB, or MOBI right here—or wherever ebooks are sold.