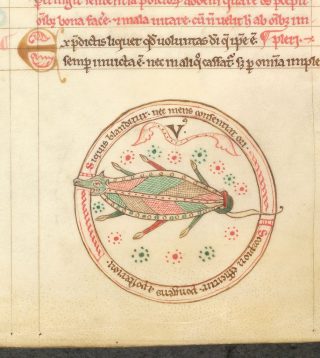 This week, archivists at the Museum of English Rural Life in Reading had their very own Howard Carter moment, as they uncovered the eighteenth-century mathematics book of 13-year-old Richard Beale, who lived on a farm in Biddenden, Kent. It seems, however, that maths wasn’t always on the young Beale’s mind – the pages are liberally scattered with charming drawings of farm life: crows, the family dog, etc. He also expanded his repertoire to ships and street scenes – as a whole, the book forms a valuable example of everyday expression three centuries ago. So far, so normal.

But Richard also drew something else. Something thing far more troubling. He drew – as the MERL revealed to a rapt Twitter audience – a picture of a chicken wearing trousers. Yep, you heard me.

Sure, it’s a crude depiction, and they are apparently transparent trousers? But they are demonstrably trousers nonetheless. Twitter duly erupted, with Harry Potter author J.K.Rowling among early fans of the fashionable fowl. She announced she had already begun a series featuring the character, along with a balaclava-wearing duck. (Hey, she might even get it out by Christmas!) The Guardian and the BBC have also subsequently picked up the story.

Many users also pointed out the similarities between Beale’s drawing and a scene from It’s Always Sunny In Philadelphia featuring a cooked chicken in a pair of jeans, a.k.a. ‘denim chicken’. Did Beale predict the storyline? Is he some kind of Sitcom Prophet? We can only speculate at this stage.

Anyway the buzz around Beale’s trouser-chicken is the latest iteration of our nascent obsession with historical marginalia, as highlighted in Mark O’Connell‘s excellent New Yorker article from 2012:

“There has recently been a slight but noticeable escalation of interest in marginalia, partly because of the way in which the Internet has cultivated readers’ enthusiasm for discussion of their own reading practices and peculiarities, and partly because of a pre-emptive nostalgia for the book as a tangible (and scrawlable) object at a time of increasing e-reader ubiquity.”

It’s a phenomenon that was especially flamboyant in the Middle Ages, with figures often fighting improbable creatures or, er, putting things in improbable places, as this Atlas Obscura article hilariously suggests. But marginalia is also a reassuring constant through the ages; we find levity, and even empathy, with fellow doodlers from down the ages, because we’ve all done it. Even the titanic Victorian intellect JS Mill was recently revealed as a serial scribbler – a newly-digitised tranche of documents reveal him to be especially waspish about Ralph Waldo Emerson, describing him as: ‘Stupid. Very stupid.’

While it seems unlikely that J.K. Rowling’s series will see the light of day (sorry, Muggles), what is certain is that the MERL has a new mascot in the making here. I look forward to visiting the Chicken-In-Trousers section of their gift shop very soon – and long may their archivists continue to uncover such clucking great finds.