When poet/novelist Charles Bukowski died in 1994, he left behind sixty-some published books and hundreds of unpublished poems. Black Sparrow Press, his lifelong (indie!) publisher, along with Ecco, his post-life (HarperCollins-owned) publisher, have been releasing his previously unread verse ever since — a pretty sweet deal for the presses and Bukowski fans alike.

But hey, not so fast.

It has come to our attention that the posthumous Bukowski is not the Bukowski of Life: the boozy, profane, misogynistic, misanthropic prophet of high school boys’ bathroom-wall glory. The writer who, troubling as he may be in retrospect, created in life a body of work that imbued the ugliness and clumsiness of white boyhood with enough wit and wisdom to create countless lifelong readers and lovers of books.

Apparently, this posthumous Bukowski is comparatively neutered. The poems are trite instead of raw and penetrating; they are warm and fuzzy instead of the end of the dinner party. This, reader, is not posthumous Bukowski’s fault, but that of his posthumous editors, who, acting on puzzling impulses, have changed the his work to such a degree that “it’s almost embarrassing.”  This according to Abel Debritto, a scholar and editor of Bukowski’s work.

Debritto, speaking with Elizabeth Flock for “PBS NewsHour,” provides the example of the poem “like a dolphin,” which was originally entitled “stone tiger, frozen sea.” (“Bukowski was not a dolphin kind of guy,” quo Debritto.)  Debritto explains that this particular poem, written in 1992, has been completely reworked by its (unnamed) editor, who rewrote all but two—two!—lines. The result is a poem that probably shouldn’t be called Bukowski’s at all. Further, “like a dolphin” concludes the collection sifting through the madness for the world, the line, the way, ruining, at least in Debritto’s opinion, the whole book.

There are countless other examples, Debritto claims, and several others have noted the curious editorial decisions as well.

(For those interested, book blogger Michael Phillips in 2013 wrote an impassioned account of his beef with the expurgated Bukowski books. It also provides a nice play-by-play of the changes made to “Manuscript – 1981” on its way to becoming “Slouching Toward Nirvana – 2005.”)

So, what in the hell? 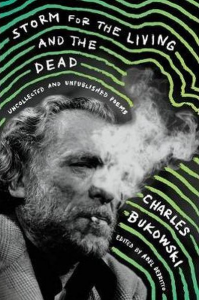 A fine question, and one that, for now, doesn’t seem to have a clear answer. Why sanitize a beloved, successful, full-time writer after his death? Why not save yourself the trouble (editors, I know you have plenty of trouble) and just let Bukowski be Bukowski (which, in life, people seemed pretty content to do) and sell thousands upon thousands of books as a result?

Who knows. I don’t know.

What Debritto does know, however, is that the living Bukowski—a “faithfully reproduced” Bukowski—needs to be reintroduced to the public consciousness. This is why, this week, Ecco has released Storm for the Living and the Dead: Unpublished and Uncollected Poems under Debritto’s editorial guidance. The book is described as “tough and hilarious but ringing with humanity… a gift for any devotee of the Dirty Old Man of American letters.”

Ask a bookseller---our very own Michael Bible, author of Sophia