Is it wrong to use the word pornography to help describe the newly renovated Vatican Apostolic Library? Maybe. But that’s the only word I have for these images of it. The Pope has his hands full with all the fun he’s having in the UK and so I think the word will stand.

Closed for three years while undergoing a renovation that cost upwards of 9 million euro, the library will finally reopen on September 20th to the five-thousand or so registered scholars that make use of its facilities each year.

Formed in the 1450’s, the library today houses one of the largest collections of illuminated manuscripts in the world, including the oldest known complete bible, which was commissioned by Emperor Constantine.

Old as the library and its contents might be, this costly renovation includes several technological additions. Nicole Winfield of the Associated Press (see AP, that’s how you attribute a story) reports:

Researchers will now find improved communications and elevator access to the Vatican’s vast collections, as well as a new tower inside the Vatican’s Belvedere Courtyard to ferry manuscripts from their bomb-proof bunker to climate-controlled consultation rooms. Inside the bunker itself, fire-proof and dust-proof floors and walls were installed to further protect the manuscripts. 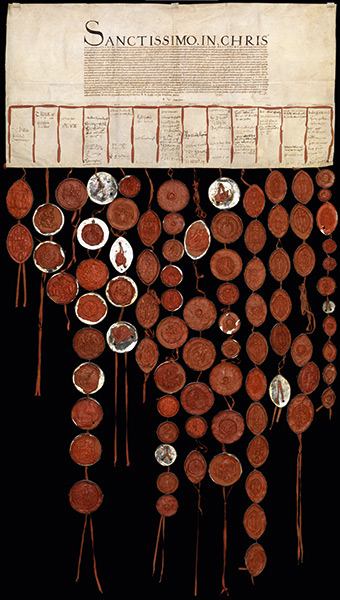 From the Vatican's secret archive: A letter from Henry VIII to Pope Clement VII in which the British monarch complains about the slowness of his marriage annulment

The library’s 70,000 books have been outfitted with computer chips to prevent loss and theft, closed-circuit cameras have been installed and new automated entry and exit gates keep tabs on who is coming in and going out.

Really though, why bother with details when you could ogle the photographs instead?

(And when you’ve had enough of the Vatican’s public library, check out these images from their secret archives).