Before they were made to teach and entertain children with their colorful interactive pictures, the Atlantic reports that pop-up books were produced for the masses to educate the general public on science and maths. 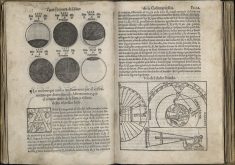 Though originally made only available to the very rich elite (like most things in this world), books became commercially available with the invention of the Gutenberg press, which made mass-production possible. As is now as was then, the public sought to learn more about the natural sciences and that pursuit of knowledge lead to the proliferation of scientific and medical texts. What’s most interesting is that because many of the theories required a visual component and physicality for readers to fully understand, intricate illustrations were made moveable to provide a more tactile learning ground. Made popular especially by astronomy texts were moveable paper wheels called volvelles, which could be used to demonstrate the movement of stars and help with calculations of their motion.

Geometry books also saw the addition of picture flaps, where texts like the English translation of Euclid’s Elements of Geometry were given helpful paper flaps that showed illustrations of various slides and triangular planes. And in medical texts, in lieu of physical dissections were the inclusion of flap anatomies, where body parts with detailed illustrations were stacked in layers on top of figures with explanation.

Today, picture flaps and pop-ups are relegated to children’s entertainment rather than for a scientific purpose. The existence of these books indicates a continued experiential aspect of reading that is still needed. Physicality and tactility with reading encourages engagement with a text, whether it is through the moving of illustrations or the mere scrawl of footnotes in a private book. And it remains a continued reminder to us that reading is not just a disembodied and mental experience, but something that is holistic and encompassing.