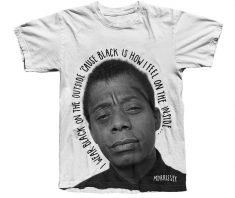 So consider this news item the literary equivalent of hot fusion, or, for our MBA-equipped readers, synergy.

For his upcoming tour (insofar as any Morrissey tour actually happens) Moz has printed shirts with the classic Smiths lyric, “I wear black on the outside / ’cause black is how I feel on the inside,” encircling the handsome face of James Baldwin (famous participant in Melville House’s Last Interview Series).

Those lyrics next to that image makes for a strange and fraught literalization of an otherwise relatable poetic sentiment — and the music blogs are not really digging it. Some outlets have called it straight-up racist.

I applaud Moz’s recent lampooning of America’s most lampoonable executive, and I appreciate the dulcet tones in which he has critiqued this country’s imperialist aspirations. That is, I support his attempts to bring his considerable influence to bear on our considerable incompetency. We know, and Pitchfork reminds us, that the outspoken singer is a true and dear admirer of Baldwin’s work, saying “Moz is a big Baldwin fan, having written about his love for Go Tell It on the Mountain and The Fire Next Time author in his autobiography, and projected video of Baldwin during his stage shows on past tours.”

But this particular shirt is a regrettable misfire of internet mash-up culture, in which the curated mingling of disparate words and images devalue one another, rather than enrich one another.

No word yet on how Morrissey’s camp will respond to the controversy, but I won’t be holding my breath for an apology, explanation, or a recall, as one of the things that makes Moz Moz is his beatific imperviousness to bad press and public beef.