Physicists in Poland have proven that all great books are just cascading multifractals, or something 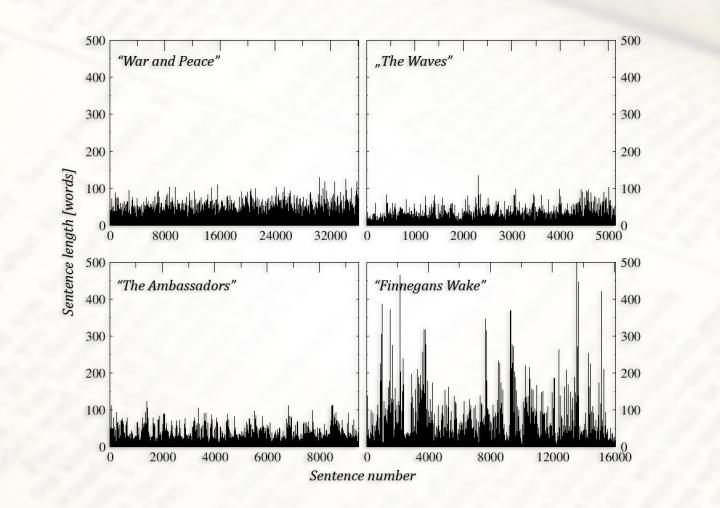 It’s nice to remember that even nuclear physicists sometimes get a little too high and start yammering on about Finnegan’s Wake. Unfortunately for all, nuclear physicists do all of their incoherent rambling in peer-reviewed scientific journals.

This week in scientific overreach, and as highlighted by The Paris Review Daily, a group of  curious scientists at the Institute of Nuclear Physics of the Polish Academy of Sciences (IFJ PAN) recently completed a statistical analysis of 113 works of classical literature. Their findings would seem to allege the presence of complex, multi-fractal mathematical patterning in the constructions of the 113 works.

To clear everything up for you, we’ll just quote Professor Stanislaw Drozdz, who stated the following in the project’s press release at EurekaAlert:

Analyses on multiple scales, carried out using fractals, allow us to neatly grasp information on correlations among data at various levels of complexity of tested systems. As a result, they point to the hierarchical organization of phenomena and structures found in nature. So we can expect natural language…to show such correlations as well…

To convert the texts to numerical sequences, sentence length was measured by the number of words (an alternative method of counting characters in the sentence turned out to have no major impact on the conclusions)…This is the posited question: if a sentence of a given length is x times longer than the sentences of different lengths, is the same aspect ratio preserved when looking at sentences respectively longer or shorter?

All of the examined works showed self-similarity in terms of organization of the lengths of sentences…more than a dozen works revealed a very clear multifractal structure, and almost all of these proved to be representative of one genre, that of stream of consciousness. The only exception was the Bible, specifically the Old Testament, which has so far never been associated with this literary genre.

It is not entirely clear whether stream of consciousness writing actually reveals the deeper qualities of our consciousness, or rather the imagination of the writers. It is hardly surprising that ascribing a work to a particular genre is, for whatever reason, sometimes subjective. We see, moreover, the possibility of an interesting application of our methodology: it may someday help in a more objective assignment of books to one genre or another…

That’s your conclusion? That genre is subjective, and that it is unclear whether or not complex cognitive structures in literature are a reflection of consciousness in general or simply an artifact of the imagination? And you plan to use this completely useless information in order to more “objectively” define genre boundaries?