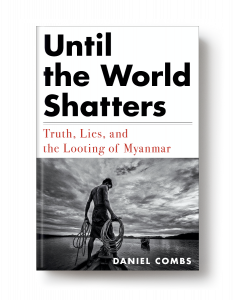 Daniel Combs spent the past six years studying Myanmar’s ethnic conflicts. The result: Until the World Shatters, the first in depth reporting on Myanmar’s jade war and the largest natural resource heist in Asia. An “illuminating portrait of a troubled and secretive country” (Publisher’s Weekly).

Combs shared some photos from his time in Myanmar below. The city’s methodical downtown planning belies a hot, tropical mess. Growth is defiant in Yangon. Trees burst out of the sidewalk and crawl over the sewer. Everywhere you look, new green leaves push through the gray soot that covers the old city. In Myanmar’s far northern Kachin State, elephants are still used to labor in the remote mountains. The young men and women on the jetty sip their beer and watch the boats while the sun dips down. They have bags of sunflower seeds and between mouthfuls one guy keeps throwing a handful of kernels out into the air. The seagulls circling the pier dive for them, but inevitably miss as the seeds fall into the water to be churned apart by the boats’ wakes. Seeing the camps firsthand was humbling. From a tall hill in the center of Kutupalong refugee camp, the sight of a million lives stretched out in an endless wave of sandbags and misery. Order your copy of Until the World Shatters now.