Photos and video from India by Suchitra Vijayan, author of Midnight’s Borders 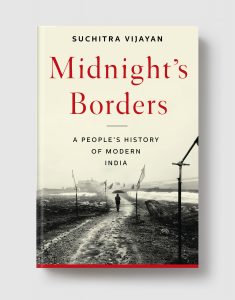 Sharing borders with six countries and spanning a geography that extends from Pakistan to Myanmar, India is the world’s largest democracy and second most populous country. It is also the site of the world’s biggest crisis of statelessness, as it strips citizenship from hundreds of thousands of its people–especially those living in disputed border regions.

In this stunning work of narrative reportage—featuring over 40 original photographs—we hear from those whose stories are never told.

Midnight’s Borders comes out May 25, 2021. Watch Suchitra’s video, including footage from her travels, and take a sneak peek at some of the incredible photos from the book. “In India today, I see a young nation ambushed halfway to freedom. Yet what we call India—the modern nation-state—is a geopolitical myth. Before the British arrived, India the nation did not exist.” “In Kashmir I stayed in the largest city, Srinagar, and made multiple trips to the border villages and hamlets … During this time I also started questioning my images and my photographic practice.” “Afghan Local Police Commander Mahmud was my guide in Paktika Province. In his lifetime he had fought against the Soviets, the Talibs, and a few others he called traitors. He was the kind of man whose stories changed every time he told them.” “Driving away from the Sundarbans, BSF camps cover the landscape. Rolling tracts of farmland fall between a fence and an international border. Lush and parched, full of life and decay, the villages riven by the frontier nevertheless have a certain vitality, a rambling quality, despite how the contingencies of the border constantly remake this terrain.” “In 2016, Rashminara found out that she was listed as a doubtful voter, when she went to vote in the local elections. Just a year earlier, in 2015, that classification became grounds to prosecute her under the Foreigners Act as a suspected ‘foreigner,’ a ‘Bangladeshi.’” “By the time we reached Marzina Begum’s house, close to twenty people started walking beside us, and another twenty or more men, women, and children assembled in the small courtyard behind Marzina’s house as I sat down with her.”