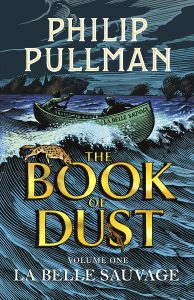 Are you eagerly awaiting Philip Pullman’s first Book of Dust volume, La Belle Sauvage? Perhaps you’re thinking about pre-ordering it. And perhaps you will shop around to find it at the best possible price.

Publishing on October 19th, the 560-page hardcover comes with a suggested retail price of £20 in the UK ($22.99 in the States) —but currently you can pre-order it on Amazon UK, at Waterstones (the UK’s largest high street book chain), Foyles (the UK’s largest indie chain), and Tesco (the UK’s largest supermarket chain) for £10. (The US situation is similar, with Amazon offering pre-orders at $11.99, Barnes and Noble at $16.85, and so forth.)

Hurray! You may think. What a bargain!

Here’s why it’s not. The humble indie bookseller is getting royally screwed. Volume sellers like Waterstones and Tesco can calculate and take the risk of selling at a fifty percent discount, and because they hold a huge market share, they can demand the publisher (in this case Penguin Random House Children’s and David Fickling Books in the UK, Knopf Books for Young Readers in the US) give them a big discount, which they then pass on to the reader.

But your local independent bookshop will sell a mere sliver of what, say, Waterstones will. And they won’t get the same publisher discount. So effectively, if they were to sell the book at £10, by the time they’d bought the stock from the publisher, they’d already be running at a loss. Competing with the big retailers puts them out of business.

Tamsin Rosewell, a bookseller at Kenilworth Bookshop in Warwickshire wrote a post about this very matter for the Kenilworth Books blog, later republished by The Bookseller. Rosewell writes:

…to be part of the buzz, we would (as it looks at the moment) have to sell this book at a loss or for no profit at all, or we could consider not stocking it. But how can we possibly not have The Book of Dust in stock and prominently on display in the shop? What kind of bookshop would not stock The Book of Dust?!

She goes on to say:

Normally, we don’t consider heavily discounted hardbacks from best-selling authors to be a problem, it is just part of being a business. However, The Book of Dust is different; it is from one of the most important and challenging authors of both this century and the last, whose work has added gold to our cultural canon. It is also very long-awaited. In the case of this book I can’t and I won’t shrug it off and say ‘Ah well, we’ll stock something else.’ I’d be an appalling bookseller if I didn’t find the courage to say that yes, in this case, this is something we should be talking about.

Another celebrated indie, the Edinburgh Bookshop, chimed in on the debate with owner Marie Moser telling Natasha Onwuemezi at The Bookseller:

The big publishers often take what are going to be good titles anyway, and discount them, to people like Waterstones or Amazon, because they know they’ll sell the volume. And I find that frustrating… it devalues books and the brands of the authors. Books are cheap anyway. A paperback is the price of a takeaway pizza. The more we do that, the more we say to customers that  a hardback isn’t worth £20. If you’re talking the big mass market authors, we very rarely stock them in hardback, because our customers are going to pick them up somewhere else at half price, and we can’t afford to discount and I’m quite opposed to it. How are [the publishers going] make enough money to fund younger writers if they’re discounting their bestsellers now. Octavia Keravla of Octavia’s Bookshop in Cirencester, agreed with the sentiment, telling Onwuemezi, “with all the pre-order deals [from the bigger retailers], we’re sort of already behind before we’ve started…. I agree devaluing and insulting. It devalues [the discounted] title as well as the one next to it. [But] there’s nothing you can do with things like that. It is what it is and you just accept it.”

The peculiar thing here is that readers really really want to buy this book. Booksellers could pretty much charge anything they wanted and it would still sell. So why this obsession with steep discounting? It’s become a norm here in the UK and shows no signs of abating. And it’s strange, because, at the end of the day, everyone in the book trade makes less money this money — the author, the publisher, the bookshop. It devalues the book as a product.

As if things weren’t hard enough, Rosewell also highlights another peculiarity of the British market that makes things difficult for indies: “With the exception of those few best-selling authors or word-of-mouth successes, hardback books really don’t sell.”

It’s sadly true. We Brits love cheap a paperback. But while spotting a bargain can be satisfying, can we all acknowledge how bloody brilliant books are please? And the blood, sweat, and tears that go into creating them? We do it with LOVE at Melville, as do all the wonderful independent publishers out there, and the indie bookshops sell with passion. But we all have to make money too, otherwise… well, we’d be out of jobs.

“We do have a few wonderful and ferociously loyal customers who insist on buying these books from us, even if they have to pay a few pounds more, but these people are the exception.” Rosewell adds.

Let’s be the exception, Moby readers! Support your local bookshop. Those extra few pounds (or dollars) probably won’t make a huge difference to you, but they will to the booksellers who sustain the publishing industry.