Philip Pullman is not happy about bookshop discounting – could the UK be about to change its pricing laws…? Bookselling is a strange, old business. In the US and the UK, book prices can fluctuate widely from shop to shop. But in some countries, this is not the case. In France, Germany, and Japan, for example, they operate on a Fixed Book Price (FBP) basis, which means there is an arrangement between publishers and retailers fixing prices across the market. This was also the case in the UK from 1900 until the early nineties, when book prices were fixed according to the Net Book Agreement (NBA), which came into effect on the first day of the twentieth century, and was ruled illegal in 1997. But now, twenty years later, there is talk of bringing it back.

So is fixed pricing a good or a bad idea?  The International Publishers Association succinctly sums up the arguments. Opponents say “retailers should be able to freely determine the prices for their products, based on real demand,” that “industry functions best when it operates under free market conditions,” and that “FBP artificially increases the prices people pay for books.” Supporters believe that “books, as objects of culture, deserve to be treated differently from other tradable commodities.” From this perspective, “FBP creates a level playing field for retailers, allowing small booksellers to survive despite the existence of giant stores, and that FBP allows readers to access a greater diversity of books.” We recently wrote about the possible impacts of discounting on indie book sales of Philip Pullman’s forthcoming La Belle Sauvage. Two weeks later, Pullman himself addressed the issue, partly blaming the abolition of the NBA for the struggles facing indies. In a July interview with the Richard Brooks of the Sunday Times, he said:

‘There is an insane, inhumane and perverted belief that the market knows best, and that it is something natural, like gravity, which we can do nothing to alter. But of course we can alter the way the market works. It’s a human construction.

“I very much want independent booksellers to survive and prosper. It’s not exaggerating to say that they are the lantern bearers of civilisation.”

So is it possible a Fixed Book Price agreement might be reintroduced in the UK, and should we want it to be? Tamsin Rosewell, a bookseller at the Kenilworth Bookshop in Warwickshire, wrote last month in her blog about the challenges facing indie booksellers. In a newer post from July 31, she addresses the question of FBP directly, suggesting that books should be sold at cover price for a minimum of thirty days.

Amazon are asking for 60% discount for publishers on many titles, this prices out the smaller publishers from being able feasibly to sell their books through this route… I’d like very much to see that principle at the heart of the old NBA adhered to: that competition should not be about pricing others out of the market, but about the creativity and imagination to introduce new writers to the public.

Other publishing professionals and booksellers are also weighing in on the debate. Ron Johns of Mabecron Books in Cornwall spoke to Daniel Curtis at the New Statesman to advocate fixing sales at cover prices for six months, adding, “We shouldn’t call it the NBA anymore… I also think we shouldn’t call it fixed price.” 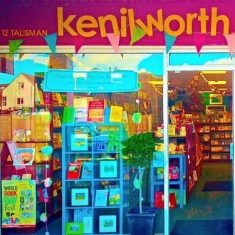 The Kenilworth Bookshop in Warwickshire.

Vanessa Lewis, co-owner of the Book Nook in Hove, told Benedicte Page and Natasha Onwuemezi at the Bookseller:

“I would love for, not the NBA, but the equivalent of the NBA to come into play. It would be interesting to see the impact it would have on book sales in supermarkets. It’s very tough [for indie booksellers] at the moment, we can’t compete. It’s a very competitive market and it’s definitely frustrating when new releases and the big-hitters are so heavily discounted. We have to work extra hard. Even when we offer a 10% discount it doesn’t compare. I think [heavy discounting] undervalues the book.”

Peter Donaldson of Red Lion Books in Colchester told Page and Onwuemezi that it wouldn’t be feasible to reintroduce the NBA, but that he would like to end the practice of printing recommended retail prices (RRP) on covers:

“I hate the message I see on enormous posters in bookshop windows across the country reading ‘Out now Half Price’. I think it has been enormously damaging to the book trade as a whole and to remove r.r.p. from the book would mean the end of that Half Price promotion.”

“There’s no need to sell it at 50 per cent off. So, in a way, the question is not for me, but for the other retailers, which is, ‘Why do you want to do this? Why do you want to halve your revenue from this book…’ We know they can sell the books full price. We absolutely know that. People would, and people do in other countries, buy the books at full price.”

And what about larger industry associations with serious clout? In one corner, we have the Publishers Association, whose CEO Stephen Lotinga opposes FBP, telling the Bookseller:

“There is no prospect of a return to the net book agreement and we believe efforts are better focussed on matters such as supporting booksellers in their call for a reduction in business rates, which could make a genuine difference for independent retailers up and down the country.”

In the other corner stands Tim Godfray, CEO of the Booksellers Association, who, like Pullman, leans pro-FBP.

“Sir Philip suggests that it is time to discuss reintroducing some form of price control. We agree. The BA Council will be discussing this at its next meeting.”

Fight! Fight to the death! The Jaffe and Neale bookship in Chipping Norton.

Patrick Neale, owner of Jaffe & Neale Bookshop in Chipping Norton, more diplomatically put it, the subject is “incredibly complicated, fraught and emotional” but “the genie’s out of the bottle now.”

It remains to be seen whether the NBA, warts and all, will or won’t be resurrected in the UK. But serious discussions are happening within the industry, and that’s a start.