Step 1: Discover that one of your parents lazily never returned a book at the local library. 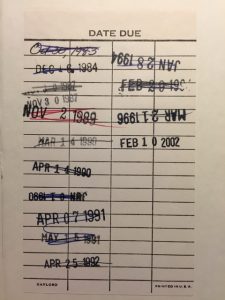 Step 2: Casually toss the book in the library’s book drop.

Such is the path to fame followed by Lee Dunham, who last month found, in her grandparents’ house in Rehoboth Beach, Delaware, a lovely hardcover copy of Mark Twain‘s Adventures of Huckleberry Finn. Opening the cover, she saw the “Rehobeth Beach Public Library” stamp … and the fact that her father had checked the book out in July of 1972. As reported by Jessica Bies at delawareonline.com, Lee returned the book while the library was closed (sneakiness runs in the family), along with a note apologizing for how late it was and briefly explaining what had happened. Not shockingly, the library had zero record of this book being missing.

“It was checked out six years before I was born, so I have an airtight alibi,” Lee said. And the library very graciously declined to impose the late fee of $1,687.50. Sadly, Lee’s father, Jim, died in 2002, but her mother did point out that this was the summer she and Jim met — so maybe he lost interest in great literature in a hurry.

The copy of Huck Finn is now back in circulation (!), but probably with a shiny new barcode instead of a paper check-out card. For reference, here are a few things that have changed since 1972, just so this guy doesn’t feel too out of the loop among his more modern neighbors:

Honestly, for good stuff, that’s about it. You know what, little fella, just stay hidden. It’s better out there.