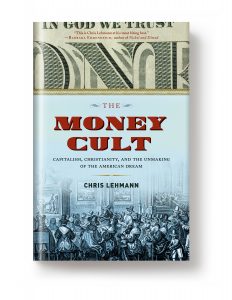 This week, as our media feeds fill up with a wild proliferation of takes on influential megapreacher Billy Graham, who died Wednesday at the age of ninety-nine, there’s only one voice we’ve wanted to hear — that of Chris Lehmann, author of The Money Cult: Capitalism, Christianity, and the Unmaking of the American Dream.

In this passage from the book, Lehmann offers a memorable portrait of Graham as he was: an operator, a fanatical anti-communist, and a leader who found Christian doctrine highly pliant under the pressures of capitalism.

The man who would become the most influential public face of Golden State piety—and postwar Protestant faith in America—was, fittingly enough, a charismatic Southern transplant. When the North Carolina-bred Baptist preacher Billy Graham had burst onto the national scene with a stunning seven-week revival in Los Angeles in 1949, he was at a career crossroads, having sacrificed a comfortable post as a Midwestern Bible College president to pursue a far more risky career as an international youth revivalist. His fiery L.A. performance—fortuitously launched two days after the USSR successfully tested its first atomic bomb—forecast a coming apocalyptic battle with godless Communism (“a religion that is inspired, directed, and motivated by the Devil himself”) that would all too likely claim greater Los Angeles as a deserving casualty, since “the Fifth Columnists, called Communists, are more rampant in Los Angeles than any other American city.” After netting a series of celebrity converts—thereby proving out, yet again, the Charles Finney strategy of targeting local elites to win over major metropolitan followings for Christ—Graham was launched as the great biblical statesman of twentieth-century America. But Graham’s breakout revival performance wasn’t the bolt from the heavens that dumbstruck media coverage of the event made it appear to be. Graham was sponsored by a consortium of fire-breathing evangelical groups, massed under the banner of the Christ for Greater Los Angeles Campaign. This quiet organizational push was just as significant as the fire-and- brimstone clamor of Graham’s Cold War revivalism; it marked the first major stirring of the modern “parachurch” movement — i.e., a cross-denominational initiative to bring evangelical influence to bear on major issues of the day. As one of the group’s chief organizers, the hard-core anticommunist preacher “Battling” Bob Shuler noted, the Graham crusade’s major sponsors were the Southland’s demotic Bible-first faiths — “the Assemblies of God, the Church of the Foursquare Gospel, the Pentecostals, the Southern Baptists,” and other adherents of the plain-folks fundamentalist gospel. These would also, of course, be the lead denominations of the Christian right, as that enormous political confluence of pararchurches would rally behind the successful 1980 presidential campaign of the great California-bred (and parachuch-converted) backlash leader Ronald Reagan.

But Graham, like Reagan, would prove to be a curiously equivocal bearer of the galvanizing free-market faith thundering down from the plain-folks pulpits of the Southland. To be sure, Graham proved to be a phenomenally accomplished revival preacher, and his active career far outstripped those of the great apostles of past Awakenings, such as Charles Finney and Jonathan Edwards. Yet for all the attention that Graham has won in the wider culture, and in spite of his carefully tended portfolio of private spiritual counseling sessions with presidents and world statesmen, Graham’s legacy is notably thin on theological and historic weight. In a sense, the fundamentalist activists who so fervently prayed, organized, and fundraised in the hopes of witnessing a wonder-working divine transformation of the worldly order got both more and less than they bargained for. In the ministry of a prophet like Graham, they won something that had seemed completely unthinkable for the evangelical movement just a generation before — unparalleled cultural respectability, and a global platform for the movement’s core message: to win the individual salvation of as many believers as possible ahead of the advancing millennium.

Somehow, though, all this did not add up to an awakening — nor even, in spite of the huge turnouts and the vast new (and overwhelmingly complimentary) media attention, much of a revival. In part, of course, this was a simple function of Graham’s own renunciation of a more intellectually demanding version of the faith. No fundamental reorientation of the believer’s life was pronounced or expected at a Graham crusade, and so the institutional half-life of his urban revivals proved much shorter than the upheavals in observance wrought by evangelical forerunners such as George Whitefield and Finney. Graham at his most punk-rock

Hundreds or even thousands would line up at the end of Graham’s rallies to pronounce themselves born again — to declare that they, like Graham, had surrendered their own will to God’s. But then — well, then the inner sanctification of life under capitalism took hold. Without any clear sense of where their revived spiritual energies might be channeled, the crowds awakened by Graham’s preaching largely went about their business as usual — which was, in many ways, precisely the gospel message that Graham was bringing to them in the first place.

Though Graham would later temper his public views on economic affairs in line with his heightened profile as a spiritual statesman, he initially opposed any social reform bearing even the faintest whiff of collectivist thinking. He commonly referred, for instance, to the Garden of Eden as a joyful place afflicted with “no union dues, no labor leaders, no snakes, no diseases.” On a 1949 crusade in England, he inveighed more directly against the perils of collectivism in the guise of the country’s postwar Labour government. Labour leaders were stoking a sinister “Communist advance,” he warned, and in the process of “killing all initiative and free enterprise”; England’s new welfare state “has not solved one of Britain’s economic ills,” he said. “Instead, it has created a thousand economic problems.”

To be sure, such sentiments won wide support on the American evangelical scene in the early years of the Cold War. More fundamentally, however, this social myopia and economic quietism were themselves signs that Graham, for all his fundamentalist ardor, had accommodated all too smoothly to the temper of modern times. The prayers of the fundamentalist movement for a second businessman’s revival had been answered — but because the revivalists in question were ill disposed to challenge any aspect of America’s business civilization, the great postwar mobilization of evangelicals was not any sort of reformist crusade. Instead, it resembled nothing so much as the inevitable coming of age of a potent new consumer demographic. 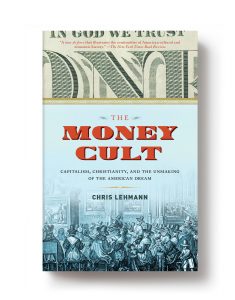 The Money Cult is on sale now. Buy your copy here, or at your neighborhood independent bookstore.