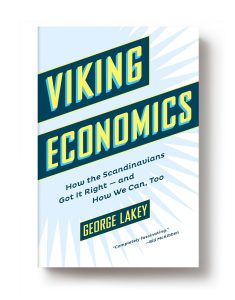 This week, as we polish our surfboards for the glorious summer ahead, we’re taking a look at some of the books we have forthcoming in the next few months.

Viking Economics is scholar and activist George Lakey’s look at how the people of Denmark, Iceland, Norway, and Sweden, in a very short span of time, managed to move past many of the problems faced by nations like the US and UK today—inequality, infrastructure, education, and personal freedom—to create some of the most egalitarian societies, and highest standards of living, in the world.

We published Viking Economics in hardcover last summer, and it’ll be out in paperback on July 11. Here’s a peek at what it’s all about.

Like most Americans today, Norwegians a century ago didn’t like the results of a wealth gap: the hunger and poverty, the crime, elderly friends warehoused or left in isolation, young people without hope of a good job. Norwegians also didn’t like the attitudes that went with inequality: an inclination toward arrogance among higher-income people and the feeling among lower-income people that they were losers, defeated by the system.

Early in the twentieth century, Norway had the formal institutions of parliamentary democracy, but ordinary people were not empowered: they did not set the direction of their society. The direction was set, instead, by the economic elite, through the political parties they dominated and the businesses they ran. Career options were limited, and there was little social mobility.

The differences between then and now are striking: If you’re a Norwegian teenager today and the job you’re interested in pursuing doesn’t require higher education, you can choose among good public vocational courses. If you learn better in a hands-on apprenticeship mode, publicly supported programs help you do that. If, instead, you prefer to develop a talent in art or music, or follow a career at sea or in engineering, you can attend a free post-secondary school.

Paid maternity and paternity leave (including for adoptive parents) is built into the system, and your job is held until you return. After the leave is over, child support is increased if you choose to be a full-time parent. If your choice is to go back to work, affordable childcare is available.

Extensive, subsidized public transport means that you probably won’t need a car to get to work. High educational standards prevail in big-city schools, as well as in the suburbs. Small towns receive subsidies to make them attractive for people who might otherwise feel forced to live in a city for cultural amenities, again increasing your options. The economy subsidizes family farming both for its own sake and for food security, so farmers can earn a reasonable income, another freedom denied in many industrialized countries.

The government offers free vocational counseling, education, and job-training resources for people seeking a career change, and entrepreneurialism is encouraged through free health care and a public pension for all: In Norway, you have the freedom to fail without becoming a failure.

Money doesn’t dominate the political system, so citizens are freer to participate meaningfully in political life—and they’re more likely to be exposed to newspapers with a variety of points of view, because journalism is subsidized to avoid a narrowing of perspective. According to Freedom House, in 2013, Norway was tied with Sweden at number one in the world for freedom of the press. Denmark was sixth, and Iceland was tenth. (The United States was twenty-sixth.) Indeed, this approach to public life has a long lineage in the region: Sweden was the first country in the world to establish freedom of the press—in 1766.

The Nordics are among the longest-living people in the world, and older citizens continue to benefit from an economy designed for personal freedom. The Global Watch Index studied ninety-six countries and rated Norway as the best place to grow old, followed closely by Sweden. The pension system enables you to live at home with health aides or in a senior living facility. You don’t need to fear hunger or lack of medicines or of health care. Every small town has a music and culture center where you can enjoy the arts and pursue your hobbies.

The crime rate is very low, partly because societies with high equality tend to experience less crime. Even in their largest city, Norwegians enjoy a remarkable degree of freedom from fear about personal safety.

Designing an economy that supports freedom and equality pays off in happiness, judging from the Vikings’ descendants making the top ten in the UN’s International Happiness Index. In 2015, the ratings showed Denmark, Iceland, and Norway sharing first place with Switzerland, while Sweden was close to its cousins.

The Organization for Economic Co-operation and Development (OECD), composed of thirty-four of the most-developed nations, compared life satisfaction experienced by the people in each country in 2013. The OECD found Norway second, Iceland third, Sweden fourth, and Denmark fifth.

And yet in spite of all this security and support, the Nordic yen for adventure has not disappeared. Americans, too, have a strong yearning for both freedom and equality, so the Nordic desire for both isn’t surprising. What is surprising, though, is that they went ahead and built an economy to serve those values. That’s the story in this book.

Like their Viking ancestors, the moderns made mistakes in their explorations. Iceland’s financial collapse of 2008 was a spectacular error, and, as I’ll describe, back in the 1980s, the Norwegians and Swedes made a series of serious economic mistakes. The Nordics haven’t built a utopia: Norwegians see themselves as “a nation of complainers,” and this book doesn’t shy away from the challenges that face them and their Nordic cousins.

Still, it’s useful for us as outsiders to observe the Nordics’ expeditions and to use them to reflect on our own situations. There are many important lessons to be learned.