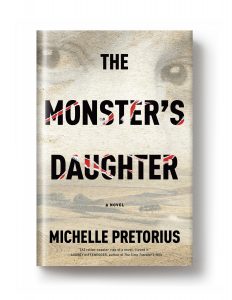 This week, as we frogs notice the bathwater of spring growing increasingly warm, we’re taking a look at some of the books we have forthcoming in the next few months.

Michelle Pretorius’s debut novel The Monster’s Daughter is a gripping story of race, murder, and unruly pasts that keep bumping up against the present.  Audrey Niffenegger, author of The Time Traveler’s Wife, has praised it as “a stereotype-busting roller-coaster ride.”

We published it in hardcover last summer, and it’ll be out in paperback on July 11. In this early scene, we meet Alet Berg, a young South African policewoman recently reassigned to the small town of Unie.

“Can I have some service here?” Alet sat down on one of the wrought iron stools that lined the bar at Zebra House, Unie’s only guesthouse. A tabby jumped off the pine counter top and disappeared into the back. The place was empty, tables set up with silverware and condiments in garland-lined buckets, snowmen-adorned specials menus stuck beneath the clear plastic tablecloths. Alet picked up a Cape Town newspaper from the bar. The headlines announced corruption allegations against local municipal officials, tourists attacked while hiking up Table Mountain, and two murders during a home invasion in Simonstown. The paper already carried a tally of road deaths for the holidays and Christmas was still weeks away. Page five showcased a special interview to wrap up the gender violence campaign. There was a picture of a young woman, fair and pink-cheeked, pointing to a patch of trees on the university campus. Her attacker had tried to strangle her, but was scared off by a security guard. There was a sidebar with bullet points on safety, most of which required some sort of male presence and conservative habits. Alet tossed the paper aside.

“Haaaaai.” Tilly Pienaar, Zebra House’s manager, appeared at the kitchen entrance carrying a case of Black Label beers, her back arched to balance the weight. She got onto the tips of her toes to set the case down on the counter, her cheeks flushing from the effort. Alet rented a flat from Tilly’s mom, Trudie. The rent was cheap and, for the most part, Trudie kept to herself, although Alet often caught her peeping through the main house’s curtains, which inevitably led to pursed lips and high-horse platitudes when their paths crossed in the garden.

Tilly ducked under the bar, and Alet grabbed one of the cans before Tilly could pop up on the other side.

Tilly set the case on the ground to stock the bar fridge. Alet only saw the top of her chin-length chestnut hair as she moved back and forth. Tilly dumped the cardboard packaging in an over folled trash bin, her whole body straining as she pushed it down.

“You want food?” Tilly looked back over her shoulder. “You look like shit, by the way.”

Alet’s reflection fought for a place between the bottles of brandy and cane that lined the bar’s big mirrored panels, the words “soft” and “ineffectual” suddenly creeping into her consciousness. Her hazel eyes were shadowed by purplish half-moons, the product of little sleep and too much junk food from the corner chip shop. The sunburn on her pale cheeks spread all the way to her clavicles, interrupted only by the collar of her shirt. Her long dark hair was pasted in a sweaty mess against her scalp, a visible indent at the edges where her uniform cap had sat.

Alet grunted and put the cap back on. “What do you mean? It takes work to look this good.”

Tilly smiled, the skin around her eyes scrunching up. “What happened?”

“Accident out on the highway. Guy hit a truck.” Alet burped.

“Don’t they have a rule about drinking in uniform?”

Tilly raised a thin plucked eyebrow. “You know we are like this.” She held up her left hand, crossing her middle and index fingers.

“He was only upholding the law, you know,” Alet said with a straight face. She imitated Mathebe’s hound dog expression and thick accent.

“He stopped me for speeding on an empty road!” Tilly raised her voice in indignation. “Threatened to arrest me. Twice. It’s persecution, I’m telling you.”

Mathebe never patronized Zebra House and Tilly crossed the street whenever she saw him walking in her direction. This had all happened before Alet transferred to Unie, before she even knew the place existed. At the time, she’d been up in Jo’burg, training for the Special Task Force, trying to prove that she could be one of the elite. That turned out to be a misguided venture. She’d been caught with her pants down, so to speak, demoted for an “indiscretion with a superior.” Instead of dealing with urban hostage situations or protecting foreign dignitaries, she was forced to live in this small town, dealing with stupid little feuds in the middle of nowhere. An elite fokop. Alet wondered if Mathebe knew why she’d been transferred to Unie. The thought that anyone might judge her disgrace really pissed her off.

Alet tipped her head back, emptying the beer can. “Well, if you’re not going to report me, you might as well hand me another.”

Tilly reached down into the fridge. “They’re all warm.”

“Doesn’t matter. And the Thursday special.”

“Maria is only in at four today. It’s saamies or nothing till then.”

Tilly ducked out under the bar and disappeared through the kitchen doorway. Froth spurted out as soon as Alet pulled the tab on her second beer. She licked it off her index finger. Somewhere in the guest house, a phone rang. Tilly’s muffled voice mechanically recited the standard greeting. There was a short pause, followed by a curt, “Please hold.” She marched back into the bar and held out the cordless. “For you.”

“Constable Berg. You are needed at the station.” Even though Mathebe had a precise, pedantic way of pronouncing his words when he spoke English, Alet still had trouble understanding him over the phone.

“Johannes, I told you I’m knocking off for lunch. I’ll get the report done before I book off. Promise, hey.” Alet winked at Tilly and took a sip from the can. There was a brief silence on the line. She imagined Mathebe closing his eyes, the way he always did when she said something that frustrated him, as if he was praying for deliverance before answering.

“A call came in, Constable.”

“I’m sure whatever it is can wait for a half hour, Sergeant.”

Another silence. “A body was found on the Terblanche farm.”

On sale now: The Monster’s Daughter by Michelle Pretorius