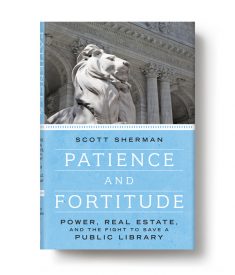 This week, as the dandelions scattered in May sprout across the fields of summer, we’re taking a look at some of the books we have forthcoming in the next few months.

Nobody has done more than journalist and Nation writer Scott Sherman to blow the cover the struggle to preserve one of America’s most beloved and iconic institutions: the New York Public Library. With financiers licking their lips over a bold plan to gut a historic building, ship millions of books out of circulation and into storage, sell off a number of branches, and more, a coalition of writers, professors, and book-lovers throughout the city joined together in resistance.

We published Patience and Fortitude in hardcover back in 2015, and we’re awfully excited to be unleashing it in paperback on September 19. Here’s a brief, early excerpt from the book.

Despite its name, the New York Public Library is a private nonprofit organization, not a government agency. It was born in 1895 from the consolidation of two nineteenth-century libraries owned by wealthy men: merchant John Ja-ob Astor and philanthropist-collector James Lenox. The Astor Library building (which is now the Public Theater, on the edge of the East Village) contained 260,000 volumes in history, literature, science, and art; its users included Nathaniel Hawthorne. The Lenox Library (which occupied the site of what is today the Frick Collection) specialized in Milton, Shakespeare, and Bunyan. By the 1890s, both libraries faced a shortage of funds, and a far-sighted decision was made: using $2.4 million from the estate of former governor Samuel Tilden, the two would be merged into one central library, in the heart of bustling Manhattan — a library that, its founders hoped, would rival the British Museum and the Bibliothèque nationale in Paris.

New York Mayor Robert Van Wyck, a creature of Tammany Hall, at first resisted the creation of the NYPL. But newspapers, notably Joseph Pulitzer’s New York World, initiated a crusade to bring it to fruition. When the mayor changed course, the World wrote: “The idea that… a public library was for a small class of rich men and bookworms has been destroyed.”

A library in Manhattan on the scale of the British Museum, built on the site of the old Croton Reservoir, would be a massive undertaking; the trustees needed a visionary to carry it out. They found one: Dr. John Shaw Billings. Phyllis Dain, in her 1972 history of the NYPL, referred to Billings as “probably the most versatile librarian that the United States has produced.” He was also one of the most outstanding physicians of his era, a polymath whose interests included hospital construction, sanitary engineering, and medical bibliography.

Raised in rural Indiana, Billings, who had piercing blue eyes and a walrus mustache, served as an army surgeon during the Civil War, during which he performed more than five hundred leg amputations; he also saw duty at the Battle of Gettsyburg. In 1864, he led an expedition to one of Haiti’s satellite islands to rescue freed slaves who were stranded in an ill-fated colonization scheme. Dain called him “a man of the world and in the world,” one who “inspired a ection as well as obedience in those who worked for him.”

It was Billings who conceived and designed the new library at 42nd Street, the top floor of which would have a colossal, tranquil, sunlit reading room, built above seven levels of elaborately constructed book stacks. Billings and his collaborator, William Ware, the founder of Columbia University’s School of Architecture, wanted books and readers in close proximity.

Six architects, including the preeminent firm of the day, McKim, Mead & White, were on the shortlist, but the trustees selected the little-known John Merven Carrère and Thomas Hastings, whose proposal was celebrated in the press: “Hail to the New York Public Library!” declared a New York Herald article, which predicted that the building “will be a marvel of architectural grandeur.”

Work began in 1899; the cornerstone was laid in 1902. Labor militancy impeded progress, but the building was nally completed in 1911. It was designed according to the classical principles of the École des Beaux-Arts in Paris, where the architects were trained. Carrère and Hastings insisted on ornately carved ceilings and doors, as well as variegated marble and tile floors; the two architects oversaw the design of the furniture and the custom-made ttings.

In his 1923 book on the NYPL, Harry Lydenberg, a senior Library official, provided a fine-grained account of the building’s interior: “The Current Periodical Room is finished in French walnut… Philippine teak is used for the oor of the trustees room… The brownish grey marble [in the Reading Room] is Touraine or Basville marble from France.”

The lions guarding the Fifth Avenue entrance were designed by the sculptor Edward C. Potter. In the 1930s, Mayor Fiorello La Guardia named them Patience and Fortitude — virtues, he felt, that city residents needed to endure the Depression.

The final cost was $9 million, an enormous sum for 1911; even the Library of Congress had been built for less. Ten workmen lost their lives during the construction; twenty others sustained serious injuries. Carrère himself did not live to see the completion of his masterwork: on March 1, 1911, a Manhattan streetcar collided with his taxicab. The NYPL’s trustees opened the building, for the first time, to allow his body to lie in state in the rotunda. Six colleagues from Carrère’s firm carried the coffin, which was covered with lilies, and two thousand people viewed it during the hour it was displayed. Thomas Hastings lived until 1929.

President William Howard Taft inaugurated the Library on May 23, 1911. When the doors opened the next day, at least 30,000 people streamed inside. The first book requested was Delia Bacon’s The Philosophy of the Plays of Shakespeare Unfolded, which the new Library didn’t own. The second request was delivered seven minutes after the call slip was submitted: the book was a Russian-language study of Nietzsche and Tolstoy, and the reader was David Shub, a Russian émigré.

Ecstatic commentary about the Library flooded the newspapers. But there was carping, too, from architecture critics. “Although regarded as important and distinguished,” Dain wrote, “the new library did not win recognition as a totally beautiful building like the Boston Public Library.” But its eminence has grown over time. Writing in the New Criterion in 2013, Michael J. Lewis, an architectural historian at Williams College, noted that the 42nd Street Library “is America’s finest classical revival building, and it is also our greatest civic building.”