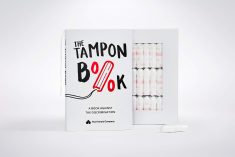 Let’s talk periods. Around 49.6% of the world’s population is female, and 26% are of reproductive age, and therefore likely to menstruate. It’s a biological fact. It is a precursor to the survival of the human race. But apparently, according to many, many countries including the US, UK, and Germany, not bleeding all over the floor is a luxury and we should pay extra on our necessary, feminine products.

This has commonly become known as the tampon tax. Tax is a complicated business and varies from country to country and from state to state in the US. In the UK, tampons and towels are currently taxed at 5%: it used to be more (peaking at 10%) but back in 2001 the current Labour government reduced it. In the US, thirty-five states currently charge a tampon tax which can vary, usually around the 4-8% mark. In Germany the tax is an unbelievably high 19%.

The Female Company is a German startup that sells organic tampons, and they are taking a stand. Earlier this year, they started selling The Tampon Book—inside its cleverly designed book-style packaging you will find fifteen tampons and a forty-six page booklet about menstruation, printed on recycled paper and illustrated by Ana Curbelo  and activist Alica Läuger.

Apart from being a fun and interesting gimmick, what is the point of this, you may ask? The real reason is that in Germany, books are taxed at only 7%. So buy a book of tampons and save yourself 12% worth of tax. Smart. If such a product was sold in the UK and classified as a book the outcome would be even better—here, books are completely free of tax (but only physical books, not ebooks. Why? Well… because the government says so, of course). Which is great, books are important … but so are periods.

But we’ve found a loophole! Books are taxed with 7 percent. That’s why our tampons now come as a book, or rather inside a book. So you save the taxes you don’t deserve.

Created by WPP agency Scholz & Friends in Berlin, the first “printing” of The Tampon Book sold out within a day, and the second within a week, selling over 10,000 copies. Many took to social media to share news of the book, including some female German politicians. A petition was also started on Change.org calling for the German tampon tax rate to be dropped to 7%, and currently it has gathered over 175,000 signatures.

This week, The Tampon Book received recognition at the Cannes Lions International Festival of Creativity, an annual event first started back in 1954, which brings the creative communications industry together from around the world and awards prizes for new ideas and innovation. The Tampon Book won the Grand Prix in PR, with stiff competition from, amongst others, Budweiser and McDonald’s. PR Lions jury president Michelle Hutton made a statement on the win, reported by Minda Smiley of AdWeek:

“We believe that The Tampon Book is a great example of modern communications … It combines creativity with the craft of public relations, and we hope this is also a callout to the craft industry of PR to work closer with the creative community, because when the two crafts go hand in hand, this is the type of magic that can be produced.”

Illustrator Ana Curbelo talked to Digital Arts about working on The Tampon Book. The article’s introduction starts with the wonderfully astute observation that:

Well quite. Because contrary to what Beyonce may think, it’s not girls who run the world. The article continues with London-based Curbelo sharing:

“My brief was to create illustrations for the Tampon Book, a campaign that aims to end the ridiculous ‘luxury tax’ on tampons by outsmarting the law—selling tampons hidden inside a book…

“With these figures I want to free people from the taboo subject of periods, but I also want people to relate to the characters and make them feel okay with themselves.

“My characters are not only proud, confident women, unashamed of periods, but they are also posed in our relaxed natural state—an unfiltered, genuine look, as opposed to the stereotypical ‘Instagram look.’ Hairy legs, hairy armpits, spots, floppy bellies, floppy boobs, cellulite, exposed labia. It was important to me to show all shapes and forms.”

You can view some of the artwork from the book online here.

It is wonderful that the humble book has been used to make an active, feminist statement. But until sanitary products are viewed as necessities rather than luxuries, and are therefore tax free, true equality will not be reached. And let’s ask ourselves, if Kenya, Canada, and India can manage to abolish tampon tax, why can’t the US, UK, and Germany?