Ahhh the English language… so nuanced, so complex, so bloody ridiculous.

P Is for Pterodactyl: The Worst Alphabet Book Ever exploits the frustration of English spelling, teaching kids (and let’s face it, some adults) the hidden horrors of silent letters.

Published by Sourcebooks Jabberwocky last week, it sold 23,000 copies in its first week according to Shannon Maughan at Publishers Weekly, and quickly had to be reprinted – a whopping extra 210,000 copies. It’s currently sitting at number 13 on Amazon.

The book is co-written by Philadelphia-based rapper Lushlife, real name Raj Haldar, and Chris Carpenter, long-time college friends, and is illustrated by Maria Beddia. Carpenter told Bored Panda how they came up with the idea for the book

“We were hanging out with our mutual friends and their kid, playing with these alphabet flashcards… We both got a laugh out of the card for “Q” which read: “Q is for Quinoa.” That was so entertaining to us because, well, what little kid knows or cares about quinoa? And also, isn’t that a terrible “Q” word, considering that it isn’t even phonetic? That was the moment that sparked the initial idea to create our own alphabet book with only words like quinoa. The natural next step was to discover that the English language is so mean and nasty, there’s no shortage of irregular words to choose from, and so the format quickly evolved into these little blurbs, like “Q is for Quinoa: We enjoy quinoa and quiche by the quays of Qatar.” As you can imagine, we had a fantastic time writing it.”

Although you might not expect a rapper to be behind a bestselling children’s book, Haldar has worked with Nick Jr, producing short, educational rap videos which teach children about science. He told Nick Valada at The Inquirer: “It’s weird to think that some of the most listened-to rap content I’ve created is in the 3-to-5-year-old demographic.”

“We believed from the beginning that this book was something special… the level of success this book has achieved so far is astonishing. What I think is making the biggest connection with fans is probably what drew us to acquire it in the first place: the minute we read it, we totally relate to it. We instantly wish we’d thought of that. Or maybe we’ve struggled with reading certain words because the English language has rules that always seem to get broken and it feels good to laugh at it. Or we have watched our kids struggle with phonetics and wish there was a way we could lighten the load.”

‘Alternative’ alphabet books are nothing new. Let’s take a whizz through a few of my personal favourites, shall we? 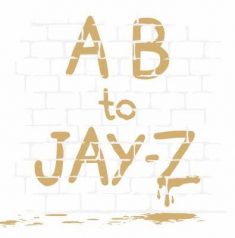 “I Got 99 Problems but my children learning their ABC’s ain’t one!”

How can you not love a book with that tagline? AB to Jay-Z by Danny Chiha and Jessica Chiha demonstrates it’s never too young to teach your kids about hiphop. Including all your heroes from Biggie Smalls to Eminem to Snoop Dog.

‘Just wrong on so many levels’ says an Amazon one star review. Perhaps so wrong it’s right? 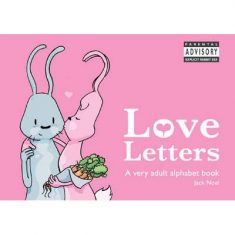 “Watch as two two consenting rabbits (Alfie and Betty) climb the A-Z of rudeness and basically make love like rabbits do.” 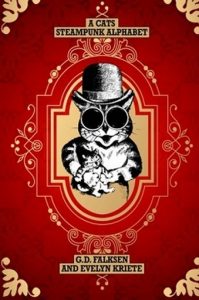 Do you like steampunk? Do you like cats? Do you enjoy the alphabet? YOU DO? Then you are so in luck.

“A is for Airship, for flying is keen. B is for Boiler, turning water to steam,” G.D. Falksen neatly rhymes in A Cat’s Steampunk Alphabet.

Is It wrong I think this is kinda cool? 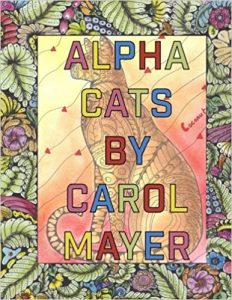 Continuing with the cat theme and the inevitability of impeding feline world domination which Tom wrote about last week, here’s another cat themed delight for you. In colouring form.

Alpha Cats by Carol Mayer is “The complete alphabet and numbers featuring CATS! Bending, stretching, twisting as only cats can do.”

Surely adult colouring books must be on the last of their nine lives by now? Will they never die?? 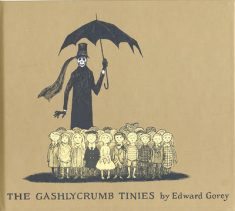 This book is genuinely awesome if you haven’t come across Edward Gorey’s work before. A gothic little masterpiece accompanied by beautifully macabre illustrations, The Gashlycrumb Tinies depicts the demise of a group of unfortunate children, letter by letter.

“A is for Amy who fell down the stairs. B is for Basil assaulted by bears. C is for Clara who wasted away. D is for Desmond thrown out of a sleigh…”