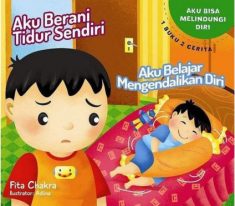 In Indonesia, the world’s fourth-most populous nation, sex education is not part of school curricula, and is not a subject easily discussed in public, or even in private.

So a new children’s book entitled I Learn to Control Myself written by Fita Chakra and published by Tiga Serengkai, has met with huge controversy and criticism.

The book synopsis says that it contains two stories: one teaching children how to sleep alone, and one about how to protect themselves from sexually transmitted diseases. A particular page of the book has been shared widely online. The illustration shows a boy lying on a bed alongside a caption that reads, “I cross my legs around a bolster tightly. For fun, I move my body up and down. Oh… it feels good. My heart is pounding, but I am happy.”

Another page shows the boy saying, “Sometimes, I put my hand inside my pants. I repeat, again and again.”

In a statement shared by the BBC, the publisher explains:

“Our intention in launching the book was so that we can help parents explain to children about the importance of protecting themselves … from people with ill-intention towards them.

“The target of this book is parents who feel their children might have this behaviour. But it also good for all parents and kids as a precaution.”

However, comments shared on social media from Indonesians have varied from the disgusted to the outraged (translations by Reuters):

@revitatiaman: “I’ve seen a few pages of the book and I don’t think there’s any education in here. Only damaging a child’s moral and brain.”

@pipijippie. “It is better to soothe a kid who is learning to sleep by himself at night through reading or reciting a praying… For Muslims, it can be done by reading the Koran, not by introducing the kid to sexual activity.” 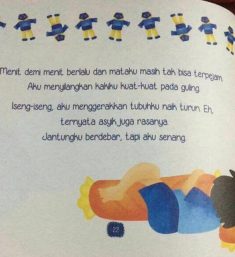 Chakra took to Instagram to share her feelings on the critical response to the book, believing that the two pages being widely shared online take the message of the book out of context.

“Our true intention is to educate children how to protect themselves from sexual abuse. If you read it through, there is a page about tips to parents, because this book is meant to be read with parents’ guidance.”

It is unsurprising the book has caused such outrage in Indonesia when, as reported by the Washington Post’s Jon Emont, the country’s highest court is even considering whether to make sex outside marriage illegal. And recently, Social Affairs Minister Khofifah Indar Parawansa is suggesting the removal of doors from university dormitories to prevent same-sex and premarital relationships, considering  “free sex” a disease, as reported by the Independent’s Will Worley.

The Indonesian Child Protection Commission (KPAI) has been fighting since 1999 to get sex education included in school curricula, to no effect so far. Commissioner Erlinda spoke to the Jakarta Post’s Liza Yosephine, believing the resistance comes from people who misunderstand sex education, including government officials who think such programs teach children how to have sex. Despite this, however, KPAI is against the publication of I Learn to Control Myself, saying it is harmful for children and could lead to “sexual deviance.”

The book has now been removed from most bookshops, with the publisher admitting that some communities were “not ready to teach kids sex education from an early age,” though it remains available at a few online bookshops. Its publication seems to have been a step too far in a country where sex is a private, possibly shameful, and potentially even illegal activity.