Out today: The Talented Ribkins 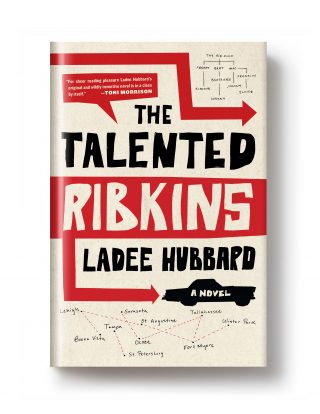 Toni Morrison wants you to read The Talented Ribkins. She writes, “For sheer reading pleasure Ladee Hubbard’s original and wildly inventive novel is in a class by itself.”

A lot of other people are psyched for The Talented Ribkins, too — like Mary Gaitskill, who calls it “a charming and delightful debut novel with a profound heart,” and its author “a welcome original.” Or Stewart O’Nan, who calls it “a quest, a treasure hunt, an unearthing of the hopeful and terrible past in service of the future.” We could go on. In starred reivew, Kirkus writes, “To describe this novel, as someone inevitably will, as Song of Solomon reimagined as a Marvel Comics franchise is to shortchange its cleverness and audacity.”

A story of race, family, and America; of superpowers and not-so-superpowers; of struggle, crime, and justice, The Talented Ribkins is like nothing else. Which is why we’re so very excited to be publishing it today.

Here’s a passage to keep you excited while you wait for your car and cape to come back from the garage and tailor, respectively. Psych thyself, humanity.

He only came back because Melvin said he would kill him if he didn’t pay off his debt by the end of the week. It was why he left St. Augustine, why he had no choice but to drive down to Lehigh Acres and dig up the box of money he’d buried in his brother’s yard fourteen years before. The only complication was his brother’s last woman, who was still living in the house, because of course he didn’t want her knowing what he was after. So he made something up.

“A toolbox,” Johnny Ribkins said, standing on the splintered porch of a wood frame two-story, while hard slats of Florida sunshine bore down on his back and the woman squinted from behind the screen door.

“A toolbox?” she said, gray grates masking her face like a veil. “Why you got a toolbox buried in the yard?”

“Oh, it’s always been there. Ever since we tore down the shed to build the basketball court.” He nodded toward a weed-covered rectangle of cracked cement at the far corner of the yard. “Just seemed like the safest place to put it at the time.”

A truck came barreling down the interstate on the other side of the fence, roar of exhaust merging with the mechanical drone of laughter coming from a TV playing inside the house. Johnny removed his hat, swatted at the moisture pooling across his brow, and stared at a rose tattoo that wound around the woman’s neck. He hadn’t seen her since his brother’s funeral but he had to admit she looked less crazy than he remembered. The lace top, miniskirt, and thigh-high boots were gone, replaced by a T-shirt, sweatpants, and white flip-flops. Her once-gaunt cheekbones were now fleshy and jowly, and her hair, deprived of the bright red wig she’d worn to the wake, was gray and cut short. He figured she must have been in her forties, about the same age his brother Franklin had been when he died.

Johnny smiled. “They old tools, see? Like for turning screws so old they don’t even make them anymore. Truth is I all but forgot about them until a couple weeks ago, when I got a delivery of antique watches at the shop.”

He pulled a handkerchief from the pocket of his shirt and scratched at a line of sweat tickling his left ear. It was hot out there and he could hear how lazy and exhausted his lies sounded. Luckily the woman was none too bright.

“Only if you a broken watch.”

A hearty “amen” and the sound of applause came from the TV inside the house.

“Tools aren’t valuable. The watches are, but only if they’re fixed. And really it’s more a matter of the fact that they don’t make them anymore. Now I’ve looked everywhere, even tried contacting the original manufacturer to see if I could get ahold of the designs to have copies made. And—”

Where was this going? Why was he wasting time trying to explain himself to some raggedy piece of interloping woman who didn’t even have sense enough to invite him inside and out of the heat, which would have been simple courtesy? He didn’t have time for this. He needed to find that money, get back to St. Augustine. And—

“So what, Johnny, you some kind of junkman now?”

“Ain’t no fucking junkman.” It just popped out.

But when he looked up she was smiling. Her lip curled back to reveal the gold filling etched against her left incisor.

“I just thought because of the watches . . . You said they were old.”

He reached for his wallet. His hands were shaking as he pulled back the screen door and handed her his business card: jonathan ribkins, acquisitions and repairs. ribkins antiques.

“Family business. Two generations . . . Didn’t Franklin ever mention it? He worked with me for almost twelve years.”

“No, we never discussed such things.”

She looked down at the card and then back at him. For a moment he thought he saw something crafty in her eyes, a form of coherency that hadn’t been there when he met her all those years ago, else he would have remembered it.

Then the TV let out another “amen” and he decided she must have found Jesus and gotten off the crack.

She handed him back the card. “You sure that’s all you want?”

She sighed. “All you Ribkins are so peculiar,” she said, then stopped because there wasn’t much more to say.

She shuffled down the dark hall. He waited until she was in the living room, then positioned himself at the center of the bottom step and started walking straight ahead, toward the interstate. And as he walked he couldn’t help but think about how sad it was to be digging through his brother’s yard again after all this time. His half brother, some twenty years his junior, whose existence he hadn’t even known about until he was a grown man, when their father got drunk at a party one night and confessed there was another son, someone named Franklin, living with his mama “out in the sticks,” and Johnny had been the one to go find him. He thought about all he’d been through since Franklin died, how hard he’d tried to put this place behind him only to find himself, at the age of seventy-two, right back where he’d started. This was especially troubling because Johnny made maps. That was his talent—not just what he did, but who he was, same way his brother had scaled walls. Johnny made maps and Franklin scaled walls, and for twelve years they’d made their living by selling the things they found on the other side of those walls, right there in the antique shop Johnny inherited from their father.

When he’d gone twenty paces he cocked his head to the left and started moving diagonally toward a large oak tree at the far corner of the yard. All of that was supposed to have ended the day his brother died. He’d made a promise to stop stealing, start living right, start doing right—to try to remember what it meant to be a decent man. And everything seemed to be going according to plan until one day he looked up and realized that somehow in his grief he’d wound up working for a man who was under the mistaken impression that he owned Johnny. So here he was, fourteen years later, crouched in the dirt trying to dig up enough money to appease a criminal.