Out today in the UK: Eurovision! 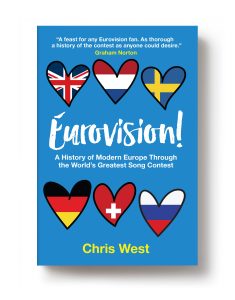 It’s a book Graham Norton calls “as thorough a history of the contest as anyone could desire,” blending the extravagant musical numbers familiar to Eurovision’s more than 200 million viewers with behind-the-scenes stories of the serious European politics that sometimes get played out in them. As Christopher D. Shea noted just lask week in the New York Times, Eurovision is “is sort of like ‘American Idol’ shot through with nationalist strife” and “a breeding ground for controversy year after year.”

To celebrate the book, here are a few outstanding moments from Eurovision history:

The inaugural Eurovision Song Contest was held in 1956, in Lugano, Switzerland. And the winner was Switzerland’s own Lys Assia — who, by the way, is alive and well today, at the age of ninety-three (if you’re reading this, Mme. Assia, we love you). Here’s the song that won. It’s… different from the sounds that dominate the contest today. Or, as Chris writes in the book, it “comes to us from a simpler, vanished world.” Enjoy:

Another story Chris tells in the book concerns Georgia’s 2009 entry, We Don’t Wanna Put In by Stephanie & 3G. The contest that year was held in Moscow, at a time when Russian president Vladimir Putin was busily supporting not one but two active rebellions in Georgia, a former Soviet republic. Try saying “We Don’t Wanna Put In” fast with a Georgian accent, and you’ll get the joke. The song was declared “too political,” and Georgia was disinvited. (Several other former Soviet republics nearly balked, but in the end participated. Estonia held a national referendum on the question.) Here it is, in all its anti-Putinist glory:

3. Are you there Eurovision? It’s me, Russia. Again.

This year’s contest has been perhaps the most controversial in memory. Ukraine won last year with Jamala’s 1944, a song about the Soviet Union’s WWII-era deportation of Ukraine’s Crimean Tatars (“Complaints were made,” Chris notes, since political songs are not supposed to be permitted in the contest, but the comittee “concluded there was no mention of current events in the song so it passed the ‘non-political’ test”). This year, Ukraine is scheduled to host the contest, and has announced that Russia’s contestant, Yuliya Samoylova, will be barred from entering the country, a consequence of her having performed in Russian-occupied Crimea over the past few years. Here’s a little bit of what we’ll be missing:

Finally, just sharing a favorite. Even though it did not win, Spain’s 2008 entry, Baila el Chiki Chiki by Rudolfo Chikilicuatre, is an amazing blast of exuberant, confusing reggaeton. It’s a simple dance you can do at home: Uno, El Breikindance; Dos, El Crusaito; Tres, El Maiquelyason; Cuatro: El Robocop. Enjoy.

Eurovision! is on sale
now. Buy it at a bookstore
in the UK. If you can’t,
consider moving.