Out today in the UK: English Uprising by Paul Stocker 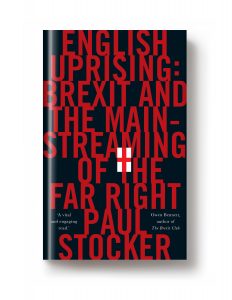 It’s party time in the UK! But put your streamers and balloons away… we’re talking Party Conferences, with Labour, the Conservatives, and Ukip all holding their gatherings within days of each other.

Last week, we heard Theresa May’s Brexit speech in Florence, proposing a delay of Brexit until 2021, and asking EU countries to allow the UK continued access to the single market for a two-year transitional period. The Tories want to have their under-baked, soggy-bottomed cake AND eat it.

Over at Labour HQ, London Mayor Sadiq Khan announced on Tuesday he wanted a commitment for a second Brexit referendum to be included in the next manifesto. But Labour leader Jeremy Corbyn also said that he is not planning one. Awkward.

And Ukip, whose conference starts this weekend (in my home town of Torquay, which just makes me want to vom a bit) is searching for a new leader to replace Nigel Farage, who resigned after the referendum, claiming he “had done his bit” and “wanted his life back.” The odds-on new favourite is Anne Marie Waters, an anti-Islam campaigner, friendly with the far-right street protesters of the English Defence League. She makes Farage look like a pussycat.

In short, we’re a country divided, stuck in Brexit limbo. Which is why today’s publication of Paul Stocker’s English Uprising: Brexit and the Mainstreaming of the Far Right could not come at a better time.

Paul Stocker has a doctorate in British far-right history and is an expert in fascist, anti-fascist, and post-fascist studies. English Uprising examines how ideas of the far right—long a fringe movement in Britain—have become part of the cultural and political mainstream, and contributed to the Brexit vote. He leads us through British history, going back to the treatment of Irish immigrants in the nineteenth century, demonstrating that hostility to immigrants and racism are, sadly, venerable aspects of British culture.

He goes on to argue that while, electorally at least, the far right have never succeeded in the UK, the mainstreaming of their ideas, led by a noxious right-wing press, is cause for worry. We’ve grown all too used to seeing headlines like The Polish baby boom: Fears for NHS & Schools as 1,000 Polish Children Are Born Every Month and Keep out, Britain is Full Up. And while many of us might scoff and disparage such vile nonsense, many chose to accept it as fact, especially when they see it reiterated daily.

While Ukip performed poorly in the last general election, securing only 1.9 percent of the of the overall vote (a fall of 10.9 percent on its 2015 share), Stocker argues that the party’s nationalist agenda has been successfully mainstreamed. Previous Ukip voters now turn to the Tories or Labour, who to greater or lesser extents have adopted Ukip perspectives on “taking back control” and “sovereignty.” And it’s a pattern we’re seeing across the globe, in Europe and of course the United States, with Donald Trump elected only months after the EU referendum.

English Uprising is a book we all need to understand the mess we’ve got ourselves into, and why, in fact, it has been a long time coming. As the sobering conclusion says:

Britain is in danger of forgetting the lessons of history. When  a paranoid, heightened national consciousness infects political debate at the expense of reason and tolerance, the consequences can be dire. The mainstreaming of the far right does not mean that those who hold fascist or Nazi ideologies are any more welcome in British politics. Brexit was neither preceded nor followed by a signifcant rise in support for totalitarian ideas or extreme political violence. Rather, the broader worldview of the far right, one which sees the “nation” as the be-all and end-all in politics and seeks to scapegoat foreigners for Britain’s problems, has become the new normal.