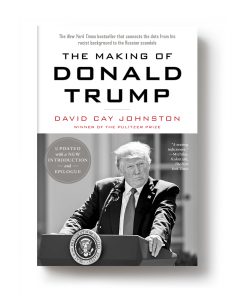 When we first released David Cay Johnston’s The Making of Donald Trump back in August 2016, a lot happened. In the New York Times, Michiko Kakutani called it “a searing indictment” of the then-candidate’s character and history. USA Today called it “the best of investigative reporting.” And it immediately spent four months on the New York Times Best Sellers List.

We’d hoped to hear the last of Trump back in November 2016 — but that, of course, did not happen. Instead, as David told us at the time:

We congratulate Donald Trump, if he gets 270 or more electoral college votes, on his victory, and recognize that the peaceful transfer of power, even to a president some of us did not vote for, is the overarching concern that all Americans should respect in every election. And then those of us who are journalists should do our job, which is to critically cover those in power, and the rest of us should pay close attention so that our democracy endures.

Whatever else is true, Trump did amass 304 electoral votes (though the world may yet learn more about how he did so), and has been our president since January. So now we’re doing the work of paying close attention so that our democracy endures, and as of today, that work includes publishing The Making of Donald Trump in paperback.

To remind you exactly who we’re dealing with here (not that you’ll have forgotten) and get you walking to the bookstore, here’s one of the book’s many, many (many) harrowing passages. The story begins in 1999, when Fred Trump III, Donald’s nephew, and his wife Lisa Trump has a son:

Less than forty-eight hours after William Trump was born, he began having seizures. In the months ahead, he would stop breathing twice. The medical bills that followed ran to nearly a third of a million dollars. Soon after the medical problems arose, Donald’s younger brother, Robert, called his nephew and said not to worry, all the medical bills would be covered. For decades, Fred Trump Sr. had provided every family member with medical insurance through his company, Apartment Management Associates.

A letter from a Trump family lawyer instructed Precise, the Trump family medical plan that was part of the Trump business empire, to cover “all costs related to baby William’s care, not withstanding any plan limits (percentage, number of visits, or maximum dollar amount) …whether or not they are deemed by Precise to be medically necessary… This directive shall remain in effect until further notice.” The instruction was dated July 19, 1999, just twenty-four days after Fred Sr. died.

Soon after that, Fred Sr.’s will was filed in probate court. Infant William’s father and the other descendants of Fred Jr. discovered that they were not collecting their anticipated share of the estate. The final will, which was executed in 1991—well before Fred Sr. was diagnosed with Alzheimer’s in 1993—split most of the money among Donald, Maryanne, Robert, and Elizabeth. Little if any of the late Fred Jr.’s presumptive fifth of the fortune was left to his line; Fred III and his sister Mary (who was named for Fred Sr.’s wife) received only $200,000, the same amount given to all the other grandchildren.

When Fred III, Mary, and their mother, Linda, learned about the will, they led a lawsuit, asserting that Fred Sr. was not of sound mind and that his signature on the will, dated September 18, 1991, had been “procured by fraud and undue influence” by Donald and the other surviving siblings. It asked that Fred Jr.’s descendants inherit a fifth of the fortune.

Donald Trump’s reaction was swift and vengeful. On March 30, 2000, one week after the lawsuit was led, Fred III received a certified letter stating that all medical benefits would cease on May 1. For little William, that was a potential death sentence.

Lisa Trump told Heidi Evans of the New York Daily News that she “burst out into tears” on learning her sickly son was in jeopardy. The devastated parents led a new lawsuit. They went to court not in Queens—where the Trump family’s influence was substantial—but in Nassau County on Long Island. A judge signed an order directing that the medical coverage continue until the matter could be resolved.

Fred III said, “You have to be tough in this family. I guess I had what my father [Fred Jr.] didn’t have. I will stick to my guns. I think it was just wrong.” He also observed of his paternal aunts and uncles: “These are not warm and fuzzy people. They never even came to see William in the hospital. Our family puts the ‘fun’ in dysfunctional.”

Mary said that the issue was money, of course, which was central to Fred Sr. and his four surviving children. “Given this family, it would be utterly naïve to say it has nothing to do with money,” she said. “But for both me and my brother, it has much more to do with that our father [Fred Jr.] be recognized. He existed, he lived, he was their oldest son. And William is my father’s grandson. He is as much a part of that family as anybody else. He desperately needs extra care.”

Also speaking with Evans at the New York Daily News, Mary Trump said, “My aunts and uncles should be ashamed of themselves. I’m sure they are not.”

Evans asked Donald Trump about this. He said that when he learned of the lawsuit over the will, his reaction was, “Why should we give him medical coverage?”

Pressed about whether it could appear coldhearted to withdraw the medical insurance of a sickly child, Trump did not waver. “I can’t help that. It’s cold when someone sues my father,” he replied. He then added a revealing comment about the position of power that he was in compared to his nephew and his desperately ill grandnephew. Referring to Fred III, Donald said, “Had he come to see me, things could very possibly have been much different for them. . . . It’s sort of disappointing. They sued my father, essentially. I’m not thrilled when someone sues my father.”

Donald said he was doing nothing but carrying out the wishes of his father. “I have helped Fred [III] over the years,” he said. “That was the will of my father. He had four children left, and that’s who he wanted to leave his estate to.”

Trump said nothing about whether he or his siblings might have had any familial or moral obligation to advise his nephew of Fred Sr.’s plans, especially since he stood to add millions to his own inheritance if the fortune was cut into fourths rather than fifths.

Years later, while seeking the Republican presidential nomination, Trump was asked about the estate tax dispute and the withdrawal of medical coverage for little William. Trump was unapologetic, a stance consistent with his statements that he has never had a reason to seek God’s forgiveness and never has. “Why do I have to repent or seek God’s forgiveness if I am not making mistakes?” Trump asked an Iowa audience of evangelicals in 2015. The report on this in the Christian Post quoted his words, then referred to Trump’s “alleged Christian faith.”

Trump said his pique at the challenge to his father’s will motivated the termination of all medical benefits for the sick child. “I was angry because they sued,” he told journalist Jason Horowitz.

The Making of Donald Trump is on sale now in paperback. Buy your copy here, or at your neighborhood independent bookstore.