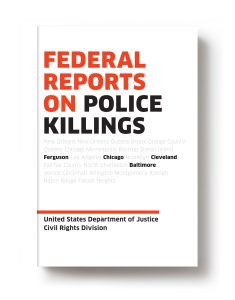 On August 9, 2014, Michael Brown, eighteen years old and black, was shot dead by Ferguson, Missouri police officer Darren Wilson, twenty-eight and white. The incident tore open national wounds that have never really had a chance to heal, and brought tens of thousands of protesters into the streets of American cities.

Since that day, American police have killed another 1,470 people, and were three times likelier to kill a black person than a white one.

The response to these four particular deaths, led by the founders, organizers, activists, and supporters of the #BlackLivesMatter movement, was also instrumental in driving the US Department of Justice to investigate the police departments of Ferguson, Chicago, Cleveland, and Baltimore.

Their findings, taken together, comprise a crucial, eye-opening document of the state of American policing — an image of where we’re at that cannot be ignored if we’re to arrive at the destination our consciences demand.

Today, we’re pleased to make these four reports available, in their entirety, as Federal Reports on Police Killings.

The current head of the Department of Justice, Attorney General Jeff Sessions, has publicly proclaimed, mind-bogglingly, that he has not read these reports. That leaves us. The time — well, the time is past due, but under present circumstances, the time, clearly, is now.