Our heroes, the booksellers 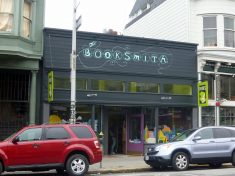 Last month, Melville House co-publisher Dennis Johnson called out the heroic efforts of the Booksmith, a venerable San Francisco indie shop, in his Publishing during wartime series. It seems others are catching on now as well.

In an article in Tuesday’s San Francisco Chronicle, Heather Knight speaks with Booksmith co-owner Christin Evans, who emphasizes the importance not just of active resistance, but also of creating a neighborhood space for people reeling from the Trump agenda: “We’re bringing the community out of depression and focusing on actions we can take,” Evans tells Knight. “The idea is to turn to books to feel empowered, to feel like we can do this, we can resist.”

In addition to taking a stand against Simon & Schuster back when the publisher was still moving ahead with Milo Yiannapoulos’s book (again, see Dennis’s reporting), the Booksmith is also filling precious window space with activism-focused titles, hosting a monthly series called Booksmith Resists (which next week will include a postcard-writing party), and giving away copies of George Orwell’s 1984, which an anonymous local writer donated to the store.

Where you spend your money matters! If you’re in San Francisco, stop by the Booksmith, pick up something to read, and give the staff a high five for the good work they’re doing. If you’re elsewhere (like maybe Cleveland), find out what stores in your area might be doing to resist, and support them however you can.