Our exciting new book trailer for A Country Doctor’s Notebook

Melville House is proud to present the trailer for our upcoming book, A Country Doctor’s Notebook by Mikhail Bulgakov. 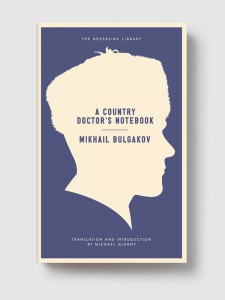 As with all independent presses, promotions for our books are very much a labor of love. But sometimes a book on our list just cries out for a solid minute-long filmic adaptation, one with plenty of pathos and gratuitous stubble. Our re-release of Michael Glenny‘s classic translation of Bulgakov’s fictionalized memoir of himself as a young doctor seemed just such a book. We rallied our staff, ordered a few pizzas and got to work.

Bulgakov’s book is set in Russia in the early decades of the last century, and to get that authentic look for our book trailer we knew setting the stage would be key. We made do with what we had on hand in the office in most cases. Our publisher Dennis Johnson wasn’t happy to be roused from his custom-built in-office bathtub—you may see him wetly lurking around the edges of those shots waiting to clamber back in—and our team of interns had a hell of a time cleaning up after the birth scene, but we think the results more than made up for difficulties. Of course much credit goes to the two unknown actors we found to play the role of Older and Younger Bulgakov: Johnny Ham and Dan Redcliff, I think their names were? It’s always nice to see two guys starting out with such a sense of humor. The ‘contracts’ they sent over were an especially funny touch.

We hope you enjoy the trailer and the delightful, sometimes dark, book that inspired it. I should mention that, strangely enough, Sky Arts will be airing a miniseries of our outtakes from the shoot over four days beginning in early December.