It’s that time of year again: the recipients of this year’s MacArthur Fellowships have been announced. The MacArthur—often called the “genius award,” though program director Cecilia Conrad insists you don’t have to be a genius to win one—is a $625,000 grant given annually to a handful of workers, in any field, who have demonstrated “extraordinary originality and dedication in their creative pursuits.” A press release issued when Conrad took the helm clarifies that “the Fellowship is not a reward for past accomplishment, but rather an investment in a person’s originality, insight, and potential. Indeed, the purpose of the MacArthur Fellows Program is to enable recipients to exercise their own creative instincts for the benefit of human society.”

This year’s winners, in addition to two distinguished novelists (Chad’s written about them right over here), some really terrific musicians, a particularly dope immunologist, and others, include artist, writer, geographer, and Melville House author Trevor Paglen, honored for his work “documenting the hidden operations of covert government projects and examining the ways that human rights are threatened in an era of mass surveillance.” 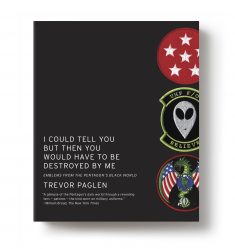 Trevor’s 2006 Torture Taxi resulted from a world-spanning quest to document the CIA’s then-secret program of extralegally abducting terrorism suspects. It was described by Amy Goodman as “the first book documenting the US government practice of extraordinary rendition.” His follow-up, 2007’s I Could Tell You But Then You Would Have to be Destroyed By Me, is a look at seventy-five patches worn by military personnel engaged in black ops, with explanatory notes. The patches are wild and amazing — one shows an alien eating a plane, between a knife and fork, with captions that read “To serve man” and “Gustatus similis pullus,” dog-Latin for “tastes like chicken.”

Trevor Paglen is a conceptual artist and geographer making the invisible operations of military and corporate power visible to everyday citizens. He draws on his training as a geographer and utilizes the tools of image-making, coupled with painstaking review of public records and declassified documents, to explore infrastructures of warfare, surveillance, and social control that are generally hidden from the general public. The resulting images, sculptural works, and writings he produces examine the ways that human rights are threatened in an era of mass surveillance and data collection.

Trevor’s friend and Melville labelmate Nato Thompson describes his work as “the geography of places that people say don’t exist.” He goes on:

He has taken telephoto lenses used for photographing stars and used them to photograph places like Area 51 [a support facility in Nevada for U-2 spy planes] or, more recently in Afghanistan, to photograph Bagram Air Base and the secret prisons there that, at this point, are no longer secret. Three years ago they were still a secret. He’s currently doing an art project where he’s tracking secret intelligence satellites in the night sky, using visual art tricks to make visible things meant to be invisible. It’s photographs of the night sky, but it’s all this secret stuff that’s up there. And there’s lots.

And Trevor isn’t the only Melvillian among this year’s MacArthur grantees — social justice organizer, What We Do Now contributor, and onetime MobyLives writer Cristina Jiménez Moreta also made the list, for her work “changing public perceptions of immigrant youth and playing a critical role in shaping the debate around immigration policy.”