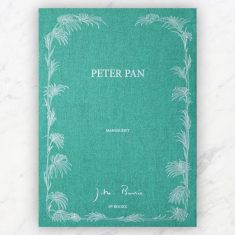 Peter Pan is a story that has been immortalized and ingrained in pop culture thanks to the 1953 animated film by Disney. It has been developed into at least 13 other movies, amusement rides, a psychology term (Peter Pan syndrome), perhaps millions of Halloween costumes, and dozens of sculptures around the world. What isn’t common knowledge is how much the author tinkered (pun intended) the character of Peter Pan. Little things such as the cute pixie girl Tinkerbell being a murderess and a closer examination of “the boy who won’t grow up.”

Last week the original manuscript of JM Barrie’s Peter Pan and Wendy was published and this version will definitely raise eyebrows for those who grew up with Peter Pan. Donna Ferguson reports for the Guardian that the edition contains some troubling and unfamiliar new insights, and includes what originally didn’t make the cut and why with the edits on full display in the author’s handwriting (truly a dying art).

The edition provides a unique chance to see how Barrie originally envisioned her characters. It’s clear in the manuscript that Barrie wasn’t quite sure if he wanted Peter Pan to be dark or lovable—and the original Peter Pan character ended up a lot less lovable. He’s portrayed as more egotistical, whereas the final published Peter Pan was only mean and naughty in a childlike way. There were many fluctuations with the female characters as well. The 1911 edition strongly features Wendy, as evidenced in the title, which is what the author had intended. However in later retellings, Peter Pan is the focal and more featured character. Another fun discovery is that Neverland was at first Never Never Land.

The opportunity to see such a beloved and famous novel like this is rare—SP Books has printed only 1,000 copies. It doesn’t come cheap but the experience of seeing the author’s own hand write the book with some of the first illustrations is a sight to be seen. If your bank account can afford it, you won’t want to miss the chance to see such a classic book in its infancy.

The Story of Ferdinand is coming to the silver screen