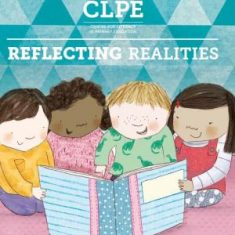 Children’s books are making headlines again — this time for their lack of diversity.

In the UK, the Centre for Literacy in Primary Education (CLPE) has been running a study entitled “Reflecting Realities” since February, examining ethnic representation in children’s literature. Their report was published earlier this week, and the results… they’re not so good.

Of the 9,115 children’s books published in the UK in 2017, only 391 featured black or minority ethnic characters (BAME). That’s four percent. And it gets worse: when it came to main characters, only one percent were BAME. Fifty-six percent involved “contemporary realism” issues such as war, refugees, and racism. In other words, a large proportion of “token” BAME characters were there to highlight social issues rather than as fully formed, narrative-driving characters of the kind in which kids can see themselves reflected. The Department of Education reported last year that 32.1% of primary school children were from ethnic minority origins: that’s a lot of kids not able to see themselves in the books they’re reading. The CPLE report concluded:

Every child is entitled to feel safe and valued. In the current socio-political and economic climate the risk of marginalisation of minority groups is heightened. If in their formative years, children do not see their realities reflected in the world around them or only see problematic representations mirrored back at them, the impact can be tremendously damaging. To redress imbalances in representation is not an act of charity but an act of necessity that benefits and enriches all of our realities.

So what the hell is going on?

Unfortunately, this is an industry-wide problem. Last summer, a survey was carried out by bookcareers.com to discover who exactly worked in book publishing in the UK. Alison Flood of the Guardian reported that of the 1,023 responses, 90.4% were white British. In 2016, World Book Day selected fifteen children’s books to promote from a cast of all-white authors. And as we wrote last summer, the 2017 longlist for the prestigious Carnegie Medal was all white. The prize has never been won by a BAME author. This white dominance is well-known and oft-discussed within the book industry and the media — but what’s being done about it?

Over the last few years, publishers have woken up to the problem and put some plans in action. As Arifa Akbar wrote for the Guardian at the end of last year:

The industry has been announcing strategies for change since 2015. Publishing houses have rolled out paid internships, mentoring schemes and traineeships to attract socially under-represented and BAME applicants on an unprecedented scale, as well as creating opportunities for women to move into boardrooms…

It appears to be a turning point for British publishing, and yet those who have been around for long enough feel a profound sense of deja vu, not least because there have been mentorship schemes and initiatives before, yet the industry has always failed to maintain the diversity it has achieved.

In 2013, bookcareers.com found that 93.7% of the publishing professionals they surveyed identified as white British. In the four years since, that figure has improved by only 3.3% — not screaming success, exactly. Suzanne Collier from bookcareers.com told Flood:

“I think publishers have been very proactive in trying to encourage diversity … in their companies.

“But it is going to take a long time for this to take hold, and until that figure is reduced to about 60/40 we have not got true diversity.

“I think it will change in the next generation of people coming into publishing. Publishers have got to do more than tokenism. If all they recruit is one or two people from a diverse background, that is not enough.”

While the problem might be more polarised in the UK, it’s also prevalent in the US: in 2016, Flood reported that a survey by multicultural children’s publisher Lee & Low Books found 79% of staff in American publishing were white.

Let’s hope things begin to change, from the ground up. And let’s also take a minute to remember that even though publishing is female-dominated (the recent bookcareers survey has it at 84.6%), at top levels, men are still largely in charge. As Akbar writes:

There is overwhelming agreement among excluded communities that systemic change can only happen when inclusivity is filtered upwards. There is not yet gender parity on boards, even though women outnumber men in the industry; a lack of social diversity is one of its most stubborn problems and there are only a handful of BAME publishing executives who hold the power to buy books.

Those old, white men squatting at the top need to think about creating room and making their companies or departments more welcoming and hospitable environments to encourage and build diversity.

Clearly a lot of work needs to be done, not only when it comes to championing positive BAME characters in children’s book, but in literature in general and in the book industry at all levels. The CLPE report is likely to become an annual publication and a marker against which to measure change. “Hopefully in 10 years’ time, or however long, it will become redundant,” Farrah Serroukh, the CLPE project’s director, told Flood. “We are really keen for the UK market to develop a more nuanced conversation. We don’t want to be talking about volume in three years’ time, but about quality.”