Happy New Year! For now, we remain on hiatus. But, seeing as how internets gonna internet, we’re using this time to look back on some of our favorite posts from 2017. Here, Ian Dreiblatt catches up on his local TV, and beholds one of the strangest moments in the history of book marketing. Originally published March 13th.

You know what’s weird? Life. Life, friends, is weird. And so, sometimes, is book publicity.

I have a modest case in point. It involves disconcertingly chipper television personalities, human cremains, and at least one great American writer.

But every story has a beginning, and this story begins with Heide Hatry, a German-born artist, curator, and writer based in New York. Hatry, fifty-one, has done some things that you haven’t. She was almost expelled from the US, for example, when, on September 11, 2007, police officers in New York City realized that what they had taken to be a bloodied corpse wrapped in an American flag and abandoned in Central Park was, in fact, a sculpture Hatry had made out of pigskin, one of her favorite materials. In 2012, she released Not a Rose, a coffee table book filled with pictures of pretty flowers that, on close inspection, reveal themselves to be made of the organs of various animals. After BP’s 2010 Deepwater Horizon oil spill, Hatry went out seeking dead things for photo series a that addressed the accident’s catastrophic ecological impact. For many years an antiquarian bookseller, she often incorporates text into her work, from writers including Franz Wright, Donna Haraway, Jonathan Safran Foer, Luisa Valenzuela, Robert Kelly, Mei-mei Berssenbrugge, and many others. 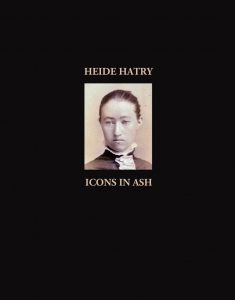 Hatry’s latest book, Icons in Ash, was published earlier this year by Station Hill Press in collaboration with New York’s Ubu Gallery. As with much of her work, the conceit is straightforward, provocative, and, let us say, different from a lot of things. The book contains portraits of people who have died, made out of the actual ashes of those people (to be clear, all pre-consenting, mostly beloved friends of Hatry’s), along with text by Jonas Mekas, Siri Hustvedt, Rick Moody, and others.

Of course, bringing out a book accomplishes little if you don’t do anything to tell the world that book exists (hello out there!), and so publishers seek to put their authors before audiences. Which, presumably, is how the following psychedelic fucking lightshow of a four-minute television clip came into being. This aired about two weeks ago. Set the controls for the heart of incongruity, and then click here to watch.

Come back when you’ve watched it, please.

For starters, exactly how often do the cast of “Good Day, New York,”—an oatmealish morning show that airs on WNYW, New York City’s flagship Fox station—get to have an exchange like this one:

Other puzzlements include: who are these two people that aren’t the real Heide Hatry, and how did they spend the rest of their day? Why does the co-host crack that odd joke about the recently-deceased Marion Javits? And what is… television?

(By the by, eagled-eyed viewers may also notice that the fourth portrait they show, of a soft-eyed old man gazing off sadly, depicts the great American writer James Purdy, as he looked late in his long life. It’s beautiful.) I am sorry to say that I’ve been unable to find a link to the second segment*, in which presumably the real Hatry stands up and everybody struggles to keep their mind inside their body for another excruciating four minutes. (Here’s Hatry, when you’ve made your guess.)

None of this, at any rate, is to poke fun at the hosts, who clearly have no idea what’s going on and respond by becoming paragons of rolling-with-it. As for Hatry, for smuggling this onto broadcast television, she deserves the thanks and applause of good-natured weirdos everywhere. Her work raises super-compelling questions about embodiment, beauty, and disgust; in the portraits’ case, add memory and human relationships. An indie run by poets is her publisher. For this all to end up on “Good Day, New York” is a coup — for Hatry, for Station Hill, and definitely for the viewers at home.

Or as the host of “Good Day, New York” once put it, “That is — look, your answer sounds totally legit to me.”

UPDATE: Sorry for the delay; the rest of Hatry’s segment has been located. It does not disappoint. There’s chintzy, intensely upbeat, totally inexplicable faux-mariachi music playing in the background. There’s the words “Heide, everybody — she works with human ash, and sometimes dog ash.” There’s the peculiar enthusiasm of one of the show’s two hosts, who creates megaton awkwardness by continually nudging Hatry to make a portrait of her, or her dog, once death has claimed them. Yeah, this is all weird. Yeah.