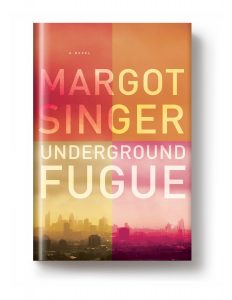 One reason to be glad you woke up this morning is that today is the long-awaited day when we publish Margot Singer’s debut novel, Underground Fugue.

Esther, who has left New York after losing a son and ending a marriage there, comes to London to care for her dying mother. Already adjusting to another country and an emotionally fraught situation, she gets to know her new neighbors, an Iranian émigré doctor named Javad and his moody teenage son Amir. Just as they’re becoming more familiar, the 7/7 attacks explode on the London Tube, and everything becomes more complicated.

Here’s something you can read as you wait in line at the bookstore. In this early scene from the novel, Esther has just awakened in the middle of her first night at her mother’s house, and steps outside for a smoke…

Underground Fugue is on sale now.
Buy your copy here,
or at your neighborhood
independent bookstore.