"Oh! barber, barber!" A cruel shave onboard The Neversink 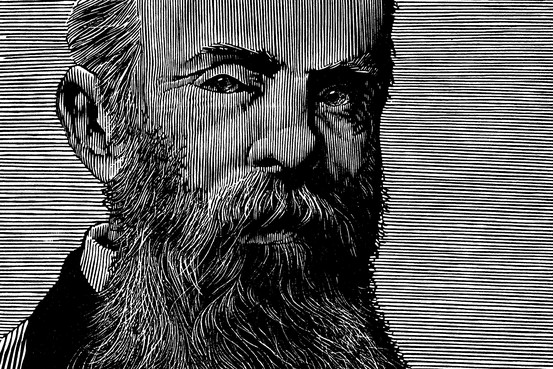 The Towering Irrelevance lists the 25 terms Herman Melville uses to describe beards in only two chapters of White Jacket or The World on a Man-of-War (via Flavorwire). Here they be:

suburbs of the chin

long, trailing moss hanging from the bough of some aged oak

To provide a little context, this effusion of whiskery vocabulary can be found in the chapters “Man-of-War Barbers” and “The Great Massacre of the Beards” which recounts the events when the ship’s captain suddenly declares that the sailors’ magnificent hard-earned beards must be shorn off, to the great consternation of the crew:

THE GREAT MASSACRE OF THE BEARDS.

The preceding chapter fitly paves the way for the present, wherein it sadly befalls White-Jacket to chronicle a calamitous event, which filled the Neversink with long lamentations, that echo through all her decks and tops….[A] feeling of sadness comes over me that I cannot withstand. Such a heartless massacre of hair! Such a Bartholomew’s Day and Sicilian Vespers of assassinated beards!

Sad sight! at which any one but a barber or a Tartar would have wept! Beards three years old; goatees that would have graced a Chamois of the Alps; imperials that Count D’Orsay would have envied; and love-curls and man-of-war ringlets that would have measured, inch for inch, with the longest tresses of The Fair One with the Golden Locks—all went by the board!

My noble [first] captain, Jack Chase, was indignant….When he went to the barber he almost drew tears from his eyes. Seating himself mournfully on the match-tub, he looked sideways, and said to the barber, who was slithering his sheep-shears in readiness to begin: “My friend, I trust your scissors are consecrated. Let them not touch this beard if they have yet to be dipped in holy water; beards are sacred things, barber. Have you no feeling for beards, my friend? think of it;” and mournfully he laid his deep-dyed, russet cheek upon his hand. “Two summers have gone by since my chin has been reaped. I was in Coquimbo then, on the Spanish Main; and when the husband-man was sowing his Autumnal grain on the Vega, I started this blessed beard; and when the vine-dressers were trimming their vines in the vineyards, I first trimmed it to the sound of a flute. Ah! barber, have you no heart? This beard has been caressed by the snow-white hand of the lovely Tomasita of Tombez—the Castilian belle of all lower Peru. Think of that, barber! I have worn it as an officer on the quarter-deck of a Peruvian man-of-war. I have sported it at brilliant fandangoes in Lima. I have been alow and aloft with it at sea. Yea, barber! it has streamed like an Admiral’s pennant at the mast-head of this same gallant frigate, the Neversink! Oh! barber, barber! it stabs me to the heart.

The sharp-eyed among you have already noticed that the name of the ship, The Neversink, is the same name as Melville House‘s forthcoming line of classic books, The Neversink Library. We borrowed the name of Melville’s boat for these remarkable books that we feel have been unfairly cut from the cultural conversation. Look for them in the Summer, because like great beards, great literature has a way of always coming back.