In honor of Rudolph Herzog’s excellent A Short History of Nuclear Folly, we built this handy “Nuclear Folly Locator,” so you can browse a few of the strange (and sometimes horrifying) nuclear accidents discussed in the book. In the map below, we placed pins marking some of the many, many, MANY “broken arrows” and lost bombs listed in the book, as well as notable test and disposal sites. Some might be near you. How reassuring! 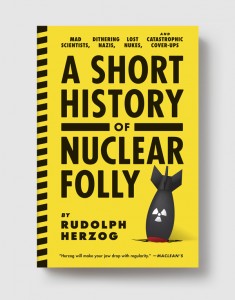 Date: November 10, 1950
Location: Quebec, Canada
A B-50 jettisoned a Mark 4 bomb over the St. Lawrence River near Riviere-du-Loup, about 300 miles northeast of Montreal. The weapon’s HE [high explosive] detonated on impact. Although lacking its essential plutonium core, the explosion did scatter nearly 100 pounds (45 kg) of uranium. The plane later landed safely at a U.S. Air Force base in Maine.

Date: March 10, 1956
Location: Exact Location Unknown
Carrying two nuclear capsules on a nonstop flight from MacDill Air Force Base near Tampa, Florida to an overseas base, a B-47 was reported missing. It failed to make contact with a tanker over the Mediterranean for a second refueling. No trace was ever found of the plane.

Date: July 27, 1956
Location: Great Britain
A B-47 bomber crashed into a nuclear weapons storage facility at the Lakenheath Air Base in Suffolk, England, during a training exercise. The nuclear weapons storage facility, known as an “igloo,” contained three Mark 6 bombs. Preliminary exams by bomb disposal officers said it was a miracle that one Mark 6 with exposed detonators sheared didn’t explode. The B-47′s crew was killed.

Date: February 5, 1958
Location: Off Georgia, United States
In a simulated combat mission, a B-47 collided with an F-86 near Savannah, Georgia. After attempting to land at Hunter Air Force Base with the nuclear weapon onboard, the weapon was jettisoned over water. The plane later landed safely. A nuclear detonation was not possible since the nuclear capsule was not on board the aircraft. Subsequent searches failed to locate the weapon.

Date: February 28, 1958
Location: Great Britain
A B-47 based at the U.S. air base at Greenham Common, England, reportedly loaded with a nuclear weapon, caught fire and completely burned. In 1960, signs of high-level radioactive contamination were detected around the base by a group of scientists working at the Atomic Weapons Research Establishment (AWRE). The U.S. government has never confirmed whether the accident involved a nuclear warhead.

Date: January 24, 1961
Location: North Carolina, United States
While on airborne alert, a B-52 suffered structural failure of its right wing, resulting in the release of two nuclear weapons. One weapon landed safely with little damage. The second fell free and broke apart near the town of Goldsboro, North Carolina. Some of the uranium from that weapon could not be recovered. No radiological contamination was detectable in the area.

Date: July 4, 1961
Location: North Sea
A cooling system failed, contaminating crew members, missiles and some parts of a K-19 “Hotel”-class Soviet nuclear-powered ballistic missile submarine off Norway. One of the sub’s two reactors soared to 800 degrees Celsius and threatened to melt down the reactor’s fuel rods. Several fatalities were reported.

Date: December 5, 1965
Location: Pacific Ocean
An A-4E Skyhawk attack aircraft loaded with one B43 nuclear weapon rolled off the deck of the USS Ticonderoga. Pilot, plane and weapon were never found.

Date: January 17, 1966
Location: Palomares, Spain
A B-52 carrying four nuclear weapons collided with a KC-135 during refueling operations and crashed near Palomares, Spain. One weapon was safely recovered on the ground and another from the sea, after extensive search and recovery efforts. The other two weapons hit land, resulting in detonation of their high explosives and the subsequent release of radioactive materials. Over 1,400 tons of soil was sent to an approved storage site.

Date: November 1969
Location: White Sea
The U.S. nuclear-powered submarine Gato reportedly collided with a Soviet submarine on November 14 or 15, 1969, near the entrance of the White Sea.

Date: November 22, 1975
Location: Off Sicily, Italy
The aircraft carrier USS John F. Kennedy and the cruiser USS Belknap collided in rough seas at night during exercises. Although it was declared as “a possible nuclear weapons accident,” no subsequent nuclear contamination was discovered during the fire and rescue operations.

Date: October 3, 1986
Location: Atlantic Ocean
A Soviet “Yankee I”-class nuclear-powered ballistic missile submarine suffered an explosion and fire in one of its missile tubes 480 miles east of Bermuda. The submarine sank while under tow on October 6 in 18,000 feet of water. Two nuclear reactors and approximately 34 nuclear weapons were on board.

Date: August 10, 1985
Location: Near Vladivostok, Russia
While at the Chazhma Bay repair facility, about 35 miles from Vladivostok, an “Echo”-class Soviet nuclear-powered submarine suffered a reactor explosion. The explosion released a cloud of radioactivity toward Vladivostok but did not reach the city. Ten officers were killed in the explosion.

Date: August 12, 2000
Location: Barents Sea
The CIS (Commonwealth of Independent States) “Oscar II” class submarine, Kursk, sinks after a massive onboard explosion. Attempts to resuce the 118 men fail. It is thought that a torpedo failure caused the accident. Radiation levels are normal and the submarine had no nuclear weapons on board.