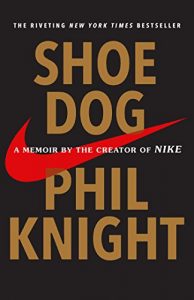 In 2016 Phil Knight–the founder of Nike–published his memoir Shoe Dog. It jumped to #1 on the New York Times Best Sellers list, and moved hundreds of thousands of copies.

Now, as Kristi Turnquist reports for the Oregonian, Knight will be receiving the Netflix biopic treatment: the online streaming service-cum-production company has optioned the rights to his mega-hit life story.

Of some of the star power behind the film, Turnquist writes:

The 80-year-old Knight, now chairman emeritus of the Nike board of directors, will produce the film adaptation of his book, along with veteran producer Frank Marshall, whose credits include “Back to the Future,” the “Indiana Jones” franchise, “The Color Purple” and “Jurassic Park: Fallen Kingdom.”

The screenplay will be written by Scott Alexander and Larry Karaszewski, whose credits include the movie “Ed Wood,” and the TV miniseries “The People v. O.J. Simpson: American Crime Story.”

The book, which featured blurbs from the likes of Warren Buffett and Bill Gates, likely appealed to so many readers because it seemed to hold within it the secret–if you just read it closely enough–to becoming a billionaire many times over. 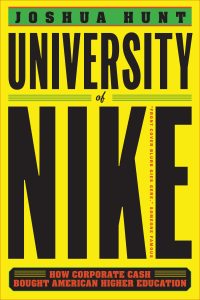 But because most readers of MobyLives already know how to achieve mind-melting wealth (and many of them often worry that there might be some ethical problems with being a billionaire), this fall we’ll be publishing University of Nike, a book about how perhaps we shouldn’t be looking to the ultra-rich to prop up our dwindling public institutions.

From journalist Joshua Hunt, University of Nike explores the apparel company’s complex relationship with with the University of Oregon, and how partnerships of this kind undermine the goals of a liberal education and damage campus culture across america. It is a crucial rebuke to the idea that our billionaires will save us.

University of Nike is a perfect pairing with the Netflix film, the forthcoming college football season, and your own musings about the privitization of public institutions.