New York Observer columnist who offered ISIS money to kill him thinks we should close all public libraries, takes heat This past Sunday morning, the New York Observer columnist Andre Walker took to Twitter to declare the following: “Nobody goes to libraries anymore. Close the public ones and put the books in schools.”

(Real quick: The first statement, we all know, is false — and classist. Plenty of people go to libraries, and according to at least one study, some people are getting better and better at making good use of them. The second statement is, well — let’s just say its true stupidity would best be appreciated after some elaboration. Perhaps in the replies? Also, this flip dismissal of one of the few remaining institutions that offer citizens free access to information is disgusting. Libraries are important.)

Okay. The tweet was sent in response to How to Train Your Dragon author Cressida Cowell, who, nearly ten hours earlier, had generously boosted a message from fellow children’s author Rachel H. Campbell, who wrote Gravy Danger.

Campbell had tweeted at Cowell, “Please can you help raise awareness that nearly all Northamptonshire libraries are under threat of closure.” Thirty minutes later, Cowell came to Campbell’s aid, adding to her tweet that “Public libraries and libraries in primary schools are closing. How are children from low income families to become readers for pleasure?” 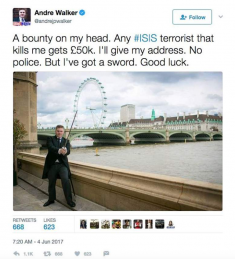 It was this message that apparently set off Walker, who is, it’s worth mentioning, something of a buffoon. The response from the library community, which is to say the community of humanity, was swift — equal parts baffled, thoughtful, and fierce.

Unluckily for us, Walker remained very online for the rest of the day.

Twitter user @mddebm replied, “Our public libraries offer more than books. Audio, DVDs, computer classes, children’s times, computer use, free wi-fi.” Walker responded, “How about we abolish them and offer a tax cut to the poor sods paying for this rubbish.” When school librarian @towntaker weighed in, noting correctly that a school library’s collection is vastly different than that of a public library, Walker claimed that that’s only because school librarians are “too lazy to run a full service.”

In response to a photo of four teens enjoying the hell out of their local library (a “bunch of ‘nobody’s,’” Digital Services Librarian Maddie Clybourn wryly quipped), Walker responded, “That is three people”— proving that in addition to having bad ideas, he also cannot count—before adding, “If that’s all you have then it should close.” Clybourn, of course, shared several more photos of patrons in her library, but Walker remained unmoved, replying, “I support library closures so we can put books in schools. These children would benefit.”

The Man Online, despite being absolutely brutally ratioed (at the time of this writing, the initial offending tweet has ~110,000 replies, 207 retweets, and 348 faves), was just getting started.

The next day,  at 11 am, as if proud of the previous day’s idiocy, he retweeted himself:

This is bad. How do you anger Librarians! https://t.co/EqSDNiC6jL

That didn’t really land, which makes sense: it’s a confusing tweet. He retweeted himself again that night, at 9 pm.

I know this makes Librarians angry but shutting libraries and putting the books into schools would be an absolute good. https://t.co/AEy4X0iAAx

Then there was this one, my personal favorite:

Librarians are like French teachers. These jobs exist in order to pay the wages of sad people who can’t get proper work.

(While all of this was going on, he also managed to retweet Donald Trump, Jr. on Matt Damon, get excited about the social media marketing of Kentucky Fried Chicken, and make a joke about vegetables that look like butts.)

But then, yesterday, something happened. New York Observer columnist Andre Walker changed his tune. He heard our voices, heard our cries and went on Facebook to ask us all to please stop replying to him on Twitter (and, to his credit, later tweeted a screencap of the Facebook post):

For what it’s worth (very little), Walker spent much of Wednesday sharing a call for library donations, as well as pieces critical of his Time Online like this one and this one, which deems him (probably correctly) “the most disliked person in the library world.”

The grossest thing of all is I get the sense that he considers all of this a net win, for his “rabble-rouser” brand or whatever. (Evidence: he retweeted this.)

Andre, if you’re reading this, what the librarians and their millions of patrons say is true: you suck.