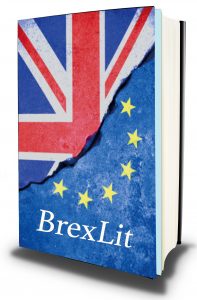 So the UK Prime Minister, Theresa May, has said she’ll be activating Article 50 by the end of March, starting the formal process for leaving the European Union, meaning the UK looks set to be on its lonesome by summer 2019.

But authors are not waiting, with a slew of Brexit-inspired novels on the way in 2017. Last year helped to pave the way, demonstrating there’s certainly an appetite for BrexLit, with the Famous Five spoof Five on Brexit Island selling over a quarter of million books in 2016 according to Nielsen Bookscan, finishing at number fourteen in the year’s bestellers chart.

And Ali Smith’s novel Autumn, perhaps the first Brexit novel to hit shelves, was published at breakneck speed in October 2016, as expressed by Alex Preston at the Financial Times: “The first of a quartet of season-themed novels, it begins with the Brexit vote and spools forwards in time (and backwards, and sideways, as is Smith’s wont) towards November 2016… It’s a brilliant and unsettling conceit, leaving you marvelling that writing this good could have come so fast.”

One of the first 2017 novels comes from Mohsin Hamid, Man Booker-shortlisted author of The Reluctant Fundamentalist. In March, Hamish Hamilton is publishing his novel Exit West, which at its heart is a love story about a young couple in an unnamed country, fleeing their home city as it swells with refugees and war breaks out. John Freeman spoke to Hamid for LitHub, asking him, “How much of this novel was in formed by the climate of the reaction to our age of migration versus the fact of migration itself?” Hamid responded:

“Part of the political paralysis we see from America to Europe stems from a desire to pretend mass movement isn’t coming. But mass movement is the history of our species and it is the likely future of our species, and maybe, just maybe, our grandkids will enjoy that future far more than our grandparents enjoyed the past. I’m a novelist, so I believe there’s more to storytelling than just memoir. There’s more than just looking back. We can remember where we’ve been, but we can also imagine where others might go.”

What else is on the way? Heinz Helle’s novel Euphoria, publishing in February with Serpent’s Tale, imagines a future in which the world has ended, with only a small group of men surviving in a cabin in Austria. It examines the anxieties of post-millennial European men.

Amanda Craig talked to Danuta Kean at the Guardian about her new novel, The Lie of the Land, saying: “Since my previous book A Vicious Circle, I have been writing more and more about the gulf between the haves and have-nots, which anyone with half a brain should be worried about now.” Publishing in June by Little Brown, it tackles just this, focusing on a couple who can’t afford to divorce and instead decide to downsize, moving out of London to a remote part of Devon, where lifestyle and attitudes are very different. Remember, only London, Scotland and Northern Ireland voted to stay in the EU, other regions voted in the majority to leave.

Crime writer Martyn Waites has a new novel planned for 2018, telling Kean: “As a crime writer you’re dealing with life and death—usually murder, because tax fraud is boring—so you’re looking into the society that created the circumstances for that to happen.” The Old Religion is set in a small Cornish village, exploring the impact of the Brexit vote on the community.

And this is just the beginning, as the industry predicts a steady onslaught of Brexit books this year and next. Kirsty Dunseath, fiction publisher at Wiedenfeld and Nicolson, told Kean: “I suspect we will see a lot more Brexit or Trump-America books once we have all lived through whatever changes these may bring [this year].”

Jasper Sutcliffe, head of buying at Foyles, added to the discussion, “We expect to see lots of new-world politics titles in 2017 to help people try to understand the new political reality, as well as more utopian fiction for those who wish to escape from it.”

BrexLit is here to stay, and a flood of TrumpLit is all but certain to follow. After all, he’s sure to give authors a lot of inspiration…