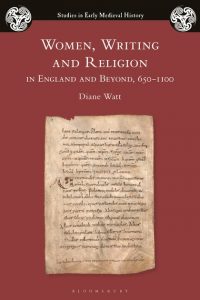 For as long as these things have been tracked, it’s been believed that the first writing by an English woman dates to the later middle-ages. But as reported by Allison Flood at the Guardian, a new book shows that Englishwomen were writing poetry and prose as far back as the eighth century.

Dianne Watt’s Women, Writing and Religion in England and Beyond, 650-1100 argues that not only did women contribute to the literary tradition in the eight-century, but that they were purposely excluded by men who discredited their writings or even rewrote the women’s original work.

Two of the women Watts shines a light in her book are Leoba, an English missionary and abbess, and Hugeburc, an English nun. There is only one letter attributed to Leoba, but it’s an important one: the earliest example of poetry written by an Englishwoman. Hugeburc’s contribution is no minor deal, either. She’s considered the first Englishwoman to write a full-length narrative, having penned an account of the lives of the brothers St Willibald and St Winnebald.  The text, only discovered as recently as the 20th century, has her name encrypted in the manuscript.

“There isn’t a modern translation so it’s not something people could go and read, but a text like that is so important,” said Watt. “And for Leoba, who was a close supporter of St Boniface, her very first letter to him includes lines of verse, which she’s composing in order to impress him. It seems to work because he subsequently invites her to travel to Germany to join the mission. She’s using poetry almost [as a] CV. So we know women were writing poetry back then.”

Watt also sees evidence that a nun, rather than a monk, could be the author of an anonymous eighth-century Life of Gregory the Great. “The emphasis on women within the text would seem to reflect the interests of women, which would seem to suggest female authorship,” she said.

And then, of course, there’s a man who seems to have taken women’s work, “rewritten” it, and put his name on it:

One example, she claims, is Bede, who did not name the authors of the local books he drew upon for his account of the early abbesses of the English church in his Ecclesiastical History of the English People. “I’m 99.9% sure that these early sources were written by women, the early communities themselves producing their own histories,” said Watt. “Bede came along and took these sources and incorporated them … It’s not a deliberate censorship, but you have a major writer like Bede coming along, and his becomes the definitive text, and the earlier ones become redundant.”

Although it’s long overdue, we’re glad to see credit being given where credit is due.