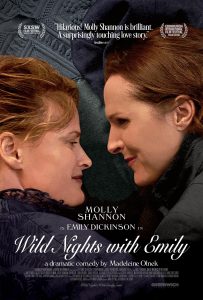 A new biopic about Emily Dickinson promises to fill in the blanks of her life, somewhat literally.

Indie filmmaker Madeleine Olnek’s Wild Nights With Emily, starring Molly Shannon as the titular Emily, is based on the poet’s private letters, and on versions of various texts as they existed before the name of Dickinson’s female lover was deliberately scrubbed.

The film aims to be something like an act of revisionist scholarship, to portray a fuller Dickinson than we’ve ever known: allowed to be passionately in love, allowed to be fun.

As Joey Nolfi writes for Entertainment Weekly (where you can also scope the trailer):

For Olnek and her leading lady, the pursuit of truth started with the mutual goal of liberating both Dickinson’s image and her passionate romance with Susan (Susan Ziegler) from the shadows of “humorless” angst that defined her long after her 1886 death—four years before a small collection of Dickinson’s much larger body of work was published for the first time by Mabel Loomis Todd (Amy Seimetz), her brother’s mistress who literally erased the true subject of Dickinson’s work to make its content more palatable in a patriarchal society.

The unconventional (well unconventional until this new film pulls the scales from our eyes) casting of Shannon, a comedian best known for her work on Saturday Night Live, is in the service of bulldozing the poet’s legacy as an uptight New Englander made in the mold of her 19th century, and replacing it with the image of a woman who transcended the constraints of her time period—enthusiastically.

As Shannon puts it: “[Dickinson] was full of lust and passion. I think that comes through in her writing. I don’t want to say she was ‘dirty,’ but she was a very passionate, hungry, deep, insightful, tuned in, expressive lover!”

The film will be released (on a limited basis) on April 12th.

Anti-normalization Tips: Occupy the Interrobang (or: how I learned to stop worrying and love the ‽)