Some replicants are headed to your television screen in the not-so-distant future. 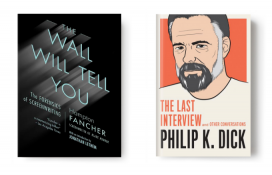 A new anime series, Blade Runner-Black Lotus, was recently announced by Alcon Television Group. The group is partnering Adult Swim and Crunchyroll to produce the series, which is currently slated for 13 half-hour episodes. Though details about the plot are currently vague, it’s been confirmed that the series is heavily inspired by the 2017 film Blade Runner 2049, will star several familiar faces from the Blade Runner franchise, and will take place in the year 2032.

Where do we come in? With one of our forthcoming books, The Wall Will Tell You by Hampton Fancher, screenwriter for both the original Blade Runner and the 2017 sequel. Here’s a run-down of what the book’s about:

“The master speaks, in this unique guide for screenwriters – and writers and artists of all kinds.

In short paragraphs–oracular and enigmatic, hard hitting and concrete–the man Forbes called a “creative genius” writes a guide book like none other for the aspiring screenwriter. Learn how to write living, breathing characters, exciting action and plot, and develop your own artistic vision. And learn how to never compromise that vision, most importantly, with yourself.”

There’s no shortage of praise for Hampton’s writing–from fans, critics, and especially the people working on the new series:

“The Blade Runner universe is an incredibly deep well for story and character with its world and mythology that audiences have been debating and talking about since inception,” say Andrew Kosove and Broderick Johnson, executive producers at Alcon.

“Blade Runner is a seminal work, and its influence permeates the genre,” says Sae Whan Song, head of business development for Crunchyroll.

“[The original Blade Runner] has remained one of the defining films of my life,” says Adult Swim’s creative director Jason DeMarco. “To be able to explore more of this universe, with the incredible talent we have on board, is a dream come true.”

A premiere date for the series has yet to be announced.

You can pre-order a bit of wisdom from the great Hampton Fancher himself right here on our site. And if you just can’t wait, in the meantime, check out Philip K. Dick: The Last Interview.

Five koans of wisdom from the screenwriter of Blade Runner