Netflix adaptation brings controversy (and sales) to Thirteen Reasons Why 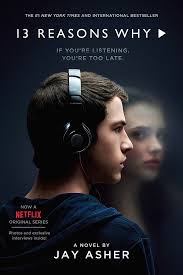 Ten years after it was first published—and, more pertinently, a few weeks after its Netflix adaptation began streaming on March 31—Jay Asher’s young adult novel Thirteen Reasons Why is at the top of the New York Times Best Sellers list: it hit #2 on April 23, took the #1 spot on May 1, and will hold #1 again this weekend, on May 7.

Obviously, this is what everyone on the publishing side of things hopes will happen when a book is adapted to screen, and it often does. (It’s worth noting that this will be the 25th week on The List for Liane Moriarty’s novel-turned-HBO-miniseries Big Little Lies, though Moriarty’s books were bestsellers to begin with.)

But in this instance, much of the Thirteen Reasons buzz is about the book’s (and the show’s) controversial subject matter: a high school student who commits suicide and leaves behind a shoebox full of homemade tapes, each addressing a different person who contributed to her decision to take her life.

For the Times, Catherine Saint Louis reports that parents, teachers, and mental health experts around the country are worried teenagers who watch the show will be inspired to commit suicide themselves. The National Association of School Psychologists issued the following caution:

[The show’s] powerful storytelling may lead impressionable viewers to romanticize the choices made by the characters and/or develop revenge fantasies. They may easily identify with the experiences portrayed and recognize both the intentional and unintentional effects on the central character. Unfortunately, adult characters in the show… do not inspire a sense of trust of ability to help.

Teen suicide prevention group the JED Foundation has also issued a guide to watching the show and some schools have apparently banned discussion of it altogether.

In response, Netflix has upped its content warnings. James Hibberd reports for Entertainment Weekly that, as of this week, Netflix has strengthened the language of existing warnings that appear before two especially explicit episodes, and added a general warning to the beginning of the series.

As for the book, it has long been a target for censorship—the American Library Association included it on their list of Top Ten Most Challenged Books in 2012—but hopefully its renewed popularity, and the sensational popularity of the show it inspired, will bring awareness to a very serious issue.

Need to talk? Call 1-800-273-TALK (8255) anytime if you are in the United States. It’s free and confidential. Find more resources at 13reasonswhy.info; find out how you can help someone in crisis at bethe1to.com.