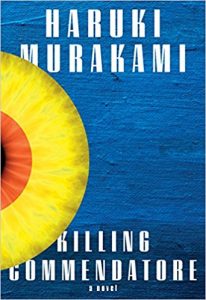 Haruki Murakami is one of Japan’s most celebrated authors, selling millions of prize-winning books across the world. His new novel Killing Commendatore went on sale in Japan and China last year and is due for publication in the UK and the US this October. While many are anticipating it eagerly, officials in Hong Kong have greeted its publication with consternation. Last week, according the South China Morning Post’s Ng Kang-chung, Danny Mok, and Su Xinqi, Hong Kong’s Obscene Articles Tribunal categorised the book as a “Class Two” publication — meaning it’s considered “indecent.” It will be made inaccessible to minors in the territory’s libraries, must be sold in a wrapping that obscures its cover, and was removed from shelves at last week’s Hong Kong Book Fair. Anyone is violation of these conditions could end up with a HK$400,000 fine (US$51,000) and twelve-month spell in prison.

So what are the book’s crimes? The tribuna is presided over by a magistrate and at least two members selected from a panel of adjudicators. The list of characteristics that can lead to a finding of indecency includes “violence, depravity and repulsiveness.” In a related piece, Su explains:

A spokeswoman of the office said it received a public complaint about the novel containing “explicit sexual details”, and later submitted it to the tribunal “in line with the established practice”.

The adjudicators appointed as a tribunal usually consider the article in private and issue an interim classification within five days from when the application is submitted.

They take into account standards of morality, decency and propriety as generally accepted by reasonable members of the community, the people for whom the work is intended, and whether the article has an honest purpose or is merely seeking to camouflage unacceptable material.

Official data from the judiciary showed that from 2011 to 2017, 1,777 submitted articles were rated Class Two and 701 Class Three.

There is sex in the book, but we’re not talking about graphic sleaze. According to the UK publisher, Penguin: “The novel is centred on art and its creation. The story centres on a painter dealing with his separation from his wife. He goes to stay in a famous artist’s house and discovers a mysterious painting in the attic that shares the book’s title.” Wow, filthy.

Lee Hoi-lam, a modern literature instructor at Polytechnic University in Hong Kong who says he’s read all of Murakami’s novels, told the South China Morning Post that given the book was published in Chinese half a year ago, the tribunal’s decision was “without rhyme or reason.” He went on to say, “In the book, sex is depicted for valid purposes, such as to reflect the main character’s emotional changes, instead of to arouse sexual pleasure among readers.”

The ruling has faced widespread criticism. More than 2,100 have signed an online petition opposing the censorship, Su writes. As she goes on to explain, this particular designation highlights a much wider problem in the country:

Critics claim the decision has brought shame on Hong Kong’s culture of freedom and openness and have criticised the “flawed judging system”, in which adjudicators are not required to possess a certain level of literary knowledge.

They worry the rating for Murakami’s novel Killing Commendatore—which includes occasional descriptions of sex like most of his books—will set a precedent and “Hong Kong would become the most conservative Chinese area”.

Jason Y Ng, president of PEN Hong Kong, told Alison Flood at the Guardian that “for a place that holds itself out as Asia’s world city, the Hong Kong authorities’ views toward sexuality and the literary treatment of it are archaic.” He continued:

“They are also arbitrary: who is to say Mr Murakami’s depiction of sex in Killing Commendatore is any more indecent than that in a James Joyce or Henry Miller novel? And yet the former is banned from a literary event and the latter is taught in school as classics.”

It is possible for the ruling to be overturned. Su writes, “Any person who submits, or is entitled to submit, the article for application can require the tribunal to review its decision at a full public hearing.” She adds that two reviews over the past ten years have found that the tribunal should be abolished altogether. A slate of official changes aimed at improving the representativeness and transparency of the body currently awaits enactment.

At least the novel avoided a Class Three categorisation, which would mean a total ban. For now the Class Two ruling remains in place.