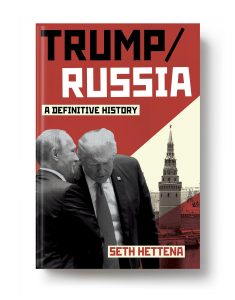 Award-winning AP journalist Seth Hettena is… kind of a big deal. Seth is the author of Trump / Russia: A Definitive History, the book of record on the news story of our time. As news continues to filter down from Robert Mueller’s investigation of the Trump campaign’s ties to Russia, over and over, Seth’s all over it — his book is the first to document those ties in detail, starting three decades ago, and tracing things out in scrupulous detail.

This week, as headlines are dominated by the news that “Taxi King” Evgeny Freidman has evaded a possible 125 years in prison on five felony charges by cooperating with Mueller’s team, we sat down with Seth to seek answers to a few urgent questions:

The Freidman deal: How big is this? What does it change?

It’s potentially a very big deal. Evgeny Freidman and Michael Cohen are longtime friends and business partners. The relationship goes back many years. I’d be tremendously surprised if, in the course of so close a relationship, Cohen had never talked to Freidman about his relationship with Trump.

Freidman was reportedly facing up to 125 years on five felony charges. He’s getting off with a $50,000 fine and five years’ probation. What does this suggest to you?

It says that Freidman knows a lot. It’s a sweetheart deal. Prosecutors are clearly expecting that Friedman will provide them with substantial information.

Freidman’s been talking a lot about how close he and his “dear dear personal friend” Michael Cohen are. What has your research shown about the nature of their partnership?

The relationship was so close that Cohen even named one of Freidman’s kids.

In your estimation, how close does this get to the president?

That’s the million dollar question. We’ll have to wait and see, but again, they wouldn’t have given Freidman such a great deal unless he has something big.

What should we be watching this story for in the days and weeks ahead?

I think we’re in for a long wait. There are so many loose strands to this story that it will take a while to tie them all together. And more importantly, we want investigators to take the time to make sure they get this right.