Movie based on Raymond Carver story stars Will Ferrell 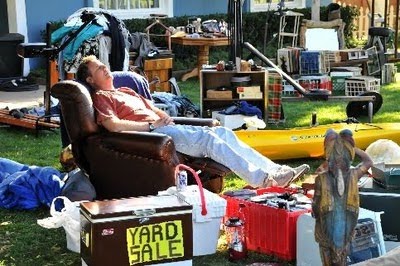 Dan Rush‘s first film, Everything Must Go, is based on Raymond Carver‘s very short story, “Why Don’t You Dance” and stars Will Ferrell.

At The Millions, Bill Morris, whose opinion I respect, claims the film version is good:

Rush wisely ignores the ticking and sets a leisurely pace, lets the camera linger, lets his actors build emotional momentum slowly, quietly.  This is important to a Carver story, as Marilynne Robinson noted back in 1988: “His impulse to simplify is like an attempt to create a hush, not to hear less, but to hear better.”

And that’s what this movie comes down to – Nick’s process of learning how to hear, and see, better….It works beautifully because Ferrell conveys an almost impossible stew of emotions – rage, self-pity, insecurity and a dry sense of humor that never comes close to turning hammy.  What a pleasant pair of surprises: there’s a new director worth watching, and Will Ferrell can actually act.

The trailer, I have to say, does not suggest such subtle pleasures. Indeed, it pounds away on one of the most obnoxious tropes of both Hollywood and “indie” films: a down-and-out male hero whose “good heart” can only be perceived by the beautiful female and/or a child and/or a person of color (in this case, a black boy). I haven’t seen the film yet, but every “tripe” sensor in my body is tingling. You be the judge: